his study was designed and performed under very difficult conditions during intensive war activities in Sarajevo. The specific characteristics of this aggressive war were a long lasting. Middle Ages siege of the city with sudden shelling and shooting of civilian targets. It can be expected that these abnormal, stressful conditions caused changes in mental and emotional reactions, as well as in the functioning of numerous organic systems. The aim of this study was to assess whether the long exposure to war conditions influenced the functioning of the cardiovascular system and its response in stress exercise in young adults of Sarajevo.

Multistage, incremental exercise treadmill testing under the Bruce protocol was performed by 14 male students of Sarajevo University (aged 18-23 years). It was planned for each subject to complete two exercise sessions in a three-month interval. Only 8 persons completed the second session because some of the subjects left Sarajevo, some were wounded, and the rest of them had to complete their duties in the Army.

It could be concluded that in young men the overall exercise capacity was well preserved but the other results (indirectly calculated maximal oxygen uptake, V02) indicated hyperreactive response. The three-month interval was short to emphasize the differences because the war conditions, under which the testing was performed, were not changed. 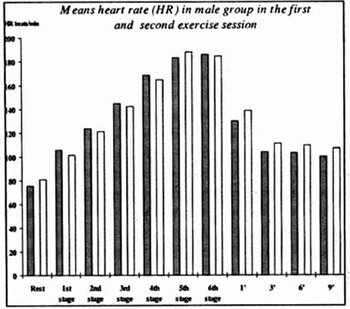 The prolonged siege of Sarajevo in the war period caused numerous changes in living and environmental conditions, life habits and subsistence of citizens of Sarajevo. It could be expected that living under these abnormal conditions would cause changes in mental and emotional reactions, as well as in biological reactions of various organic systems. Stress is the interaction between the person with its individual characteristics and states as well as with the physical and social environment. There is a great interest in cardiovascular responses to stress (1,2) under various conditions. It was observed that under some circumstances stress caused marked increases of systolic blood pressure and heart rate, probably mediated through beta adrenergic mechanisms (3). There are a lot of risk factors generally accepted to relate to coronary heart disease (CHD): smoking, mental stress, hypertension, lack of physical activities, family history of CHD, obesity, hypercholesterolemia. There is substantial evidence that mental stress enhances risk for CHD, but the mechanisms underlying such an influence remain unclear. It was observed that mental stress elicits haemoconcentration with associated increases in serum lipid concentrations, hemostatic factors and blood viscosity. Stress subjects showed significant increases in blood pressure and heart rate (4). Mental stress can activate the symphatoadrenal and hipothalamic-pituitary-adrenocortical systems. Prolonged and intense arousal of these systems has been implicated in the precipitation of cardiac arrhythmia and coronary vascular spasm, as welt as in pathogenesis of CHD (5). While steady state aerobic exercise is usually characterized by a tight coupling of metabolic, cardiovascular and pulmonary functions (6), mental stress can elicit cardiovascular and pulmonary adjustments in excess of metabolic requirements, so-called stress-induced hyper-activity (7).

The aim of this study was to assess whether life under abnormal, stressful war conditions has influenced the characteristics of cardiovascular response to the stress exercise in young adults.

The subjects in this study were selected among apparently healthy young volunteers, students of Sarajevo University (war generation 1994/1995). To identify the appropriate sample, all potential subjects (34) initially completed a medical history and physical examination. Fourteen male subjects were included in the definitive procedure (aged 18 to 23 years). They had neither medical histories nor signs of either cardiopulmonary disorders or contraindications for stress exercise testing. None of them used any medication during the study period.

Subjects had various levels of physical activity. It was planned for each subject to complete two exercise sessions in a three-month interval, but only 8 subjects attended the second session. The reasons for their absence were related to the war. Table 1. shows the physical characteristics of subjects in the first and second exercise sessions.

In the first contact, each subject was given basic information about the procedure. Height and body mass were measured shoeless. All testing and measuring were performed between 8:00 A.M. and 12:00 P.M. to avoid diurnal variations. The cuff for measuring blood pressure was placed on the left arm. Silver-silver-chloride electrodes with circumpherential adhesive were used for EKG registrations and placed on the front chest wall. Arterial blood pressure and the EKG were registered after 5 minutes resting in a supine position.

The exercise stress test was done using the standard Bruce protocol (involving 7 stages, lasting 3 minutes each, with a range of speed from 2,7 km/h to 9,6 km/h and an increase of the grade from 10% to 22%). During the exercise and recovery, HR and 3 electrocardyographic leads (combination II, V2 and V5 leads) were constantly monitored. Registration of standard twelve leads EKG-tracings were done 10 seconds before the end of each stage and in the period of recovery (1,3,6 and 9 minutes). The reasons for ending the test were: achieving the predieted maximum heart rate, exaggerated blood pressure response to exercise, fatigue, weakness, shortness of breath, or EKG changes, etc.

The results were analyzed with SPSS (Statistical Package for Social Sciences, version SPSS/PC 1984). Results were expressed as mean ± standard deviation. SPSS/PC analyses of multiple variance (MANOVA) was used to determine if there were significant differences in the groups using F-test (multiple and unique). The differences were accepted as significant if Sig. of F were equal or less than 0.05.

The mean values and standard deviations of heart rate during the graded, incremental treadmill exercise are shown in Table 2.

In Fig.1 are shown the mean values of heart rate in both exercise sessions.

There were no significant differences among two exercise sessions.

The results of our study showed that in spite of prolonged and intensive war stress, the resting values of cardiovascular variables (heart rate, systolic, diastolic, mean arterial and pulse pressure) in young adults of Sarajevo were within physiological range. This can be explained by the fact that in this study only healthy subjects were included according to the following criteria: very low probability of coronary heart disease based on their age, symptoms and resting electrocardiograph traces, and the lack of coronary risk factors such as hypertension, obesity and hypercholesterolemia. The risk factor that could not be avoided in the specific situation in Sarajevo was the chronic mental stress caused by the war. The cardiovascular hyperreactivity observed during mental stress in comparison with exercise at an equivalent V02 demonstrated an uncoupling of metabolic and cardiovascular functions, presumably attributable to excessive sympathetic stimulation, perhaps together with parasympathetic inhibition. Using the method of Blix et al. (8) cardiovascular hyper-reactivity has been reported with respect to HR (9), cardiac output (10), preejection period (9) and total peripheral resistance (9). Due to the above mentioned, it is very important because a large body of psychophysiological literature suggests that exaggerated circulatory adjustments during psychological stress contribute to the development of cardiovascular disease (11, 12).

Cardiovascular response in incremental multistage treadmill exercise in young adults of Sarajevo during the war period was characterized by a graded increase in heart rate. That is in accordance with the findings of Fleg et al. (13), who observed that HR in response to stress exercise increases more gradually in males than in females. The lower resting values of HR in males could be in relation to their higher aerobic capacity and peak work capacity. Balady et al. (14) and Sullivan et al. (15) have also reported higher HR across external work rates in females than in males during leg and arm exercises. In our previous reports, we observed that there were no significant differences among peak heart rates related to gender. Males and females reached the same peak HR, but at different levels of exercise. To reach the same peak HR values, males needed more time (16). This is not in accordance with other reports (13,15).

The mean estimated maxima! exercise capacity, as well as the treadmill test duration was significantly higher in males than in females (16). These results were comparable with the results of symptom-limited, graded exercise treadmill testing that was performed by 4968 healthy young people (17). The values for V02 (not measured, but calculated indirectly) were unexpectedly high in our study, especially if we take into account the fact that subjects were representatives of a predominantly sedentary population. The results of our study indicate hyperreactive cardiovascular response.

The resting values of cardiovascular variables (heart rate and arterial blood pressure) in healthy young male adults were within physiological range, in spite of long exposure to chronic stress caused by war.

In response to the stress exercise heart rate increased gradually, and in both exercise sessions almost 100% of the predicted peak heart rate was achieved (95,33 % and 98,20%, respectively). The recovery period was prolonged, and the high values of heart rate were estimated, even at the end of the recovery period. The overall exercise capacity was well preserved, and V02 indicates the hyperrective response probably caused by mental stress as a part of the stress caused by war.