The somatic, functional and metabolic characteristics of children at 8 years of age have been established. These children have, for the previous three years, lived under stressful conditions of direct shelling, poor nutrition and movement. At the same time there has been an evaluation of the effects of programmed physical activities which have been applied in the aim of stimulating natural physical dynamics and functional developments and the elimination of stagnation of development which occurs from conditions of unfavorable factors. The research and the program of physical activities included 41 boys, starting at an average age of 8 years and four months. The somatic characteristics of the boys, according to 25 antropo-metric measures (IBP), show a lag in the boy’s physical development according to their age group by one year. The lagging behind is especially evident in volume dimensions and underskin tissue fat (Przulj, 1991., Bonacin, 1995. Blaha, 1982.). An improvement of conditions and a greater scope of movement activities for the duration of 8 months did not significantly influence on the improvement of the somatic and functional status of the boys in comparison with the controlled group (N=21) of the same average age during another measurement period. While resting, on the level of aerobic threshold, anaerobic threshold and maximal oxygen uptake, the value of ergonometric, functional and metabolic parameters were confirmed: V02 stpd, Ve btps. Ve * V02-1, Ve*VC02-l, RQ, fc (beats*min-l), work load in Watts and on the basis of these relative indicators were completed. The gradual growth of work load was completed with the help of bicyklergometer (Monark). After 3 minutes of easy pedaling (warming-up) an initial work load was given of Watt*body mass and increased by 1/3 of the mass*Watt every minute until the achievement of maximal oxygen uptake. Individual aerobic and anaerobic thresholds (Aep) and (Anp), for each person examined were confirmed on the basis of the smallest sizes in the points of the crucial curves Ve*V02-l and Ve*VC02-l (Wasserman et al., 1973 and 1991, Cooper et al, 1984, Yacov, 1991). For the level of maximum oxygen uptake, the work load was taken, on which the greatest worth of V02 was achieved and it did not increase with the foflowing greater work load. The average value of ergono-metric, functional and metabolic parameters of the initial state and the final measurement of the experiment group:

Significant statistical differences are confirmed only on the values of V02* fc-1 I and II measuring Ρ = 001.

The results confirm the assumption of the general stråte-gy of adaptation, directed in the formation and protection of functional reserves from exhaustion, for priority of growth needs and development and only on that basis can an increase of ability for an even greater level of their total and rational usage can occur. For a significant growth ability of a greater level of mobilization of functional reserves there is a need for a greater intensity and a longer time period in completing physical activities. 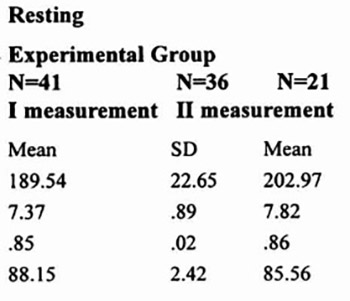 With a view into somatic status and functional potential of boys at the age of 8 years, an assessment of parameters of growth and physical development and functional and metabolic parameters have been established on the level of aerobic and anaerobic threshold and maximal oxygen uptake (Brdaric, 1973. Radojevic, 1973. Vranesic, 1988. Przulj, 1991. Bonacin, 1995.). A full program of anthro-pometric measurements (IBP), ergonometric, Functional and metabolic parameters on the level of aerobic and anaerobic thresholds (as an indicator of the ability for mobilization of functional potential) and the maximum oxygen uptake (as a measure of total aerobic organism productivity) are assumed as criteria for:

The assumption is that with this type of approach a comptex notion of the character of the adaptation process, can be achieved for this growth period for the increase of functional reserves of the organism and the ability for their most complete rational mobilization.

The research included 41 boys of 8 years and four months of age in the first measurement and 9 and one month old in the second measurement. The control group was made up of 21 boys with an average of 9 years and three months of age. The choice of those examined was completed among boys from a narrow urban environment, after the expressed desire and agreement of their parents who wished there to be a testing of their functional abilities.

The estimation of oxygen and carbon dioxide in exhaled air is determined by the Beckman-Oxygen Analyzer OM-11 and C02 Analyzer LB-2 system. The program of physical activity (elementary games, natural scope of movement and sport games), the boys of the experimental group were included. The middle value (MV) and standard deviation (SD) were established for all investigations of the parameter. Meaningful differences between meddle values of the parameters was established by T-tests and between groups of methods of discriminatory analysis (Ben. W. Bolch, 1979.)1

With the ergonometric parameters the created level of work load in Watts were registered and relative functional and metabolic parameters indicators were completed on the basis of their.

The achieved level of work load before Anp is greater than the level of work load before the Aep by 7.2 that is 11.4%. The examinees achieve an average work load of 2.68 Watt*k-1 that is 70.8 -72.7% load in Watts in comparison to the level of work load achieved before the maximum oxygen consumption. This shows the fact that the aerobic-anaerobic zone overcomes a relatively narrow, which according to all judging this is a general characteristics of this age group. Before Anp growth mobilization of oxygen and pulse capacity in comparison to the value before V02 max total is 10% that is 4%. Oxygen uptake by kg physical mass achieved 35..35 V02kg (ml*kg-l*min-l) and oxygen pulse 5.63-6.15 V02*fc-I. The pulse cost of work is somewhat lower 1.06 dfc*Watt-l, and oxygen cost is meaningfully greater 10.7 dV02*Watt-l than before Aep. The completed growth of functional and metabolic parameters after 8 months of applied program of all sides of the physical activities of the boys in the experimental group (II measurement) is of statistical meaning. The parameters with the greatest discriminant arrangement are: ventilation equivalent C02, ventilation equivalent V02, percentage of achieved work load and pulse achieved on the level of V02 max, work load Watt* kg physical mass-1 and oxygen uptake by kg physical mass. Differences in ergonometric, functional and metabolic parameters of the boys of the experimental group (second measurement) and the control group are on the level of meaning P=.033. The size of the measurement of parameters before Anp are proportional actual somatic characteristics and characteristics of the everyday physical activities.

Ergonometric, functional and metabolic sizes established on the level of V02 max are taken as upper limits of inclusion of aerobic potential and reliable measures of the estimate of the level of mobilized functional reserves of the organism on the level of aerobic and anaerobic threshold. It should be kept in view, the fact that the direction of adaptive functional changes is determined beforehand by intensity of work activities that is they are determined by energetic sources. The level of work load before V02 max is, in comparison to the level of Anp, relatively high. The difference is around 30%. Close to the same size of the growth of the same oxygen consumption in comparison to the kg physical mass and oxygen pulse. The pulse cost of the work load and percentage of achieved work effectiveness are at least on this level of load. In accordance to the oxygen cost of Watts load achieves the greatest size. Achieved growth of the size of ergonometric, functiònal and metabolic parameters confirmed before the second measurement of the experiment group is of statistical meaning. The greatest discriminant value has a ventilation equivalent to oxygen, involvement of heart contractions, work load and intensity of oxygen uptake in comparison to kg body mass and pulse cost of work load. A meaningful difference in ergonomtric, functional and metabolic parameter sizes on the level of V02 max experimental and control group is on the level of P=.027 (Table 2b).

General characteristics of the mobilization of ergono-metric, functional and metabolic parameters on the level of aerobic threshold, aerobic threshold and maximum oxygen uptake are the following:

The practical value of the determined individual somati c profiles has been confirmed, ergonometric and metabolic characteristics of the examinees (during rest-times, before aerobic threshold, anaerobic threshold and maximum oxygen uptake) in the programming of physical activities in accordance to the ability of children of this age group. Adaptive reactions of the organism on the applied program on all sides of the physical activities were not obviously manifested as the project foresaw.