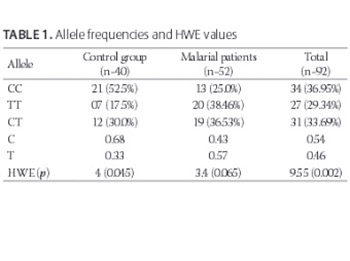 Malaria is a mosquito-borne disease caused by a sporozoan parasite Plasmodium. It is characterized by chills, cyclic fever, headache, vomiting and fatigue, diarrhea, dizziness, abdominal pain, dry cough, jaundice, splenomegaly, and hepatomegaly [1,2]. It is common in tropical and sub-tropical regions of the world. In 2010, about 219 million cases and 660,000 deaths due to malaria were reported [3]. In 2011, active malarial transmission was reported in 99 countries. About 1 million cases of malaria are reported in Pakistan every year, while 12% rural Pakistanis are chronic carriers of malaria [2].

The key factor in malaria prevention is the adequate vector control. However, most of the mosquito species are resistant to insecticides [4]. Another preventive strategy involves the induction of immunity against Plasmodium. The human immune system has Toll-like receptors (TLRs) that recognize the pathogens-associated molecular patterns (PAMP). Signal transduction occurs through the Toll-like interleukin-1 receptor (TIR) domain present in all TLRs. The gene TIRAP (Gene ID=114609) located on chromosome 11q24.2, encodes the protein MAL (Myeloid differentiation primary response 88 (MyD88) adapter-like). MAL is a TIR adapter protein (TIRAP), involved in the TLR4 signaling pathway. This protein activates different proteins resulting in the release of inflammatory cytokines against the pathogens. It has been proposed that TLR-mediated pathways play a key role in autoimmune and inflammatory responses [5]. TLRs expression in dendritic cells leads to an antigen-specific adaptive immune response [6]. The variations in TIRAP gene can change the response towards pathogen invasion. Many single nucleotide polymorphisms in MAL/TIRAP have been reported to be in correlation with the protection against invasive microbial infections [7].

The S180L SNP (rs8177374 at the position 126,162,843) in TIRAP gene alters the inflammatory response of an individual [8]. A nucleotide C is replaced by a nucleotide T, having as a consequence replacement of the amino acid serine with leucine. The presence of serine induces normal inflammatory response. However, the presence of leucine suppresses the secretion of inflammatory substances. Our hypothesis states that severity of malaria depends upon the host’s genotype in terms of affecting the control of inflammatory substances. Since the TIRAP S180L polymorphism is important in cytokine production, its effect on etiology of malaria caused by Plasmodium falciparum needs to be further investigated. The current study examined the role that this polymorphism plays in modulation of the acquisition of malaria caused by Plasmodium falciparum.

A total of 133 individuals were included in the study. The subjects were divided in 2 groups. The experimental group comprised of 73 patients diagnosed with malaria. The control group comprised of 60 healthy volunteers. Samples for the “malarial group” were collected in the period from May 2013 to July 2013. The patients were contacted through the local district hospitals. Plasmodium falciparum was ide.jpgied in patients’ blood on the basis of its distinctive surface pattern. Samples for control group were collected from the healthy donors of University of Sargodha in April 2013.

The study design was approved by the Ethical committee of University of Sargodha. All the procedures were in compliance with the Declaration of Helsinki. Ethical norms were properly respected during the process of sample collection.

All blood samples were taken by venipuncture of the cubital vein. The blood (3 ml) was collected in EDTA coated vials as a whole blood for genetic analysis.

The genetic study was based on the SNP detection of the S180L polymorphism in MAL/TIRAP gene. DNA was isolated through kit method (#GF-BD-100, Vivantis Technologies Sdn. Bhd., Subang Jaya, Malaysia). The SNP was detected using allele-specific PCR. PCR master mix (# 12532-016, Invitrogen, Life Technologies, ThermoFisher Scie.jpgic, Waltham, MA, USA) was used for the SNP detection. Both the genomic DNA and the fragments of PCR products were visualized by the UV Transilluminator (BIOTOP, Shangai Bio-Tech Co., Ltd., Shangai, China), after running on 2.0 % agarose gel and staining with ethidium-bromide. The sequence 5’ CACCATCCCCCTGCTGTC 3’ was used as TIRAP 180 F1 for the ide.jpgication of the C allele. The sequence 5’ CACCATCCCCCTGCTGTT 3’ was used as TIRAP 180 F2 for the ide.jpgication of T allele. The sequence of common reverse primer used in both of the reactions was 5’ ACCCCGACAGCCTTT 3’. The annealing temperature was 60.7 °C. At this temperature, PCR product of 250bp was obtained.

A case-control study was designed to investigate the association between the TIRAP S180L polymorphism and malaria caused by Plasmodium falciparum. A total of 133 individuals including 60 controls and 73 patients of malaria caused by Plasmodium falciparum were tested for genotype using the allele-specific PCR. The mean age of the patients with malaria was 24.46 ± 11.20 (mean ± S.D) years, while age of the patients in the control group was 21.88 ± 1.34 (mean ± S.D) years. The mean age of the patients in both groups was 23.80 ± 8.42 (mean ± S.D) years. There were 49.3% males in the group of patients with malaria, while this percentage for the control group was 15%. Ninety-two samples showed positive PCR amplification results.

Genotype of 21 patients with malaria and 20 healthy controls could not be ide.jpgied, due to the lack of PCR amplification.

The odds ratio estimation demonstrated that TT genotype carriers are vulnerable to malaria (Table 2). Presence of TT genotype enhanced 2.946 times the chances of acquiring malaria caused by Plasmodium falciparum (OR: 2.946; 95% CI: 1.096-7.918). In contrast, CC genotype was negatively associated with malaria and it decreased 0.301 times the chances of having malaria (OR: 0.301; 95% CI: 0.124 - 0.729) in selected population. The heterozygous genotype showed no significant effect in modulating the probability of acquisition of malaria caused by Plasmodium falciparum (OR: 1.343; 95% CI: 0.556 – 3.241).

Malaria is a common infectious disease, causing the serious health hazards worldwide. Up to the present day, no effective vaccine is available for it’s prevention. Studies show that different populations in the world respond to Plasmodium falciparum infection in a different manner. After exposure to the same microbial agent, some people develop severe malaria, while the others present only mild symptoms. The difference in immune response may be due to the individual genetic variations. The immunity against Plasmodium may depend upon a single gene or the combination of different genetic factors. For understanding the role of genetic factors in causation of malaria due to Plasmodium falciparum, it is ideal to design association studies that employ case-control models. The variations in frequency of SNP affect these associated functioc.

Since the immune responses are genetically controlled, they have been extensively studied by the geneticists. Our study focused on the role that genetic factors play in susceptibility or resistance to malaria caused by Plasmodium falciparum. In this study, TIRAP polymorphism was studied using allele-specific PCR. A total of 133 individuals including 60 controls and 73 patients of Plasmodium falciparum were investigated for genotype ide.jpgication. However, 21 patients with malaria and 20 healthy individuals could not be genotyped with the employed primers. Failure in PCR amplification of these samples suggests the presence of other alleles in population under observation, urging a detailed research with the new primers. Failure of PCR amplification in these patients, however, does not overshadow the importance of investigation of the association between C and T allele and malaria caused by Plasmodium falciparum.

Frequency of both alleles of TIRAP S180L, i.e. S180 and 180L, were in accordance with Hardy-Weinberg Equilibrium (HWE), both for healthy individuals and for patients suffering from Plasmodium falciparum malaria. When the present data were analyzed in non-str.jpgied manner, a statistically significant deviation from HWE was observed. Kumpf et al also found that all the groups in his study were under the Hardy-Weinberg Equilibrium [10]. The control group genotypes were in accordance with HWE in the research conducted by Khor et al [11]. Zakeri et al reported that TIRAP S180L frequencies followed HWE in the case of control group, but the frequencies were deviant from HWE in the patients’ group [8].

A strong association was noticed between S180L polymorphism and malaria caused by Plasmodium falciparum. The findings of current study suggest that homozygous genotype was negatively associated with the infection and may serve as a protective factor against malaria caused by Plasmodium falciparum. This might be due to an enhanced release of cytokines. In contrast, effects of 180L were different, increasing the chances of having malaria caused by Plasmodium falciparum. Similar results were observed by Zakeri et al [8]. They found TIRAP 180L to be a risk factor of malaria. In the study carried out by Hamann et al [12], homozygous alleles for 180L were also found to be a risk factor of malaria. In addition Khor et al, reported the similar observations [10]. Another study investigated the combined effects of TLR4 and MAL/TIRAP variants in different infections. They noticed the important role of the genetic combination both in homozygous and in heterozygous condition [9]. A slightly protective effect of the heterozygous genotype was observed by Hamann et al [12]. In another study, the researchers observed that carriers of heterozygous TIRAP S180L are protected from severe malaria but are, however, at risk of developing a mild form of malaria [8]. The present study has its limitations in terms of small sample size. The samples were collected from a limited area and no estimation of cytokine level was made. The employment of only one genotyping strategy is another limiting factor.

The presented findings suggest that homozygous TIRAP S180L wild-type allele has a protective effect, while the homozygous mutant type can pose a risk during the exposure to parasite, Plasmodium falciparum. The heterozygous carriage does not affect the susceptibility or resistance to this infection in local Pakistani population. On the basis of results of the present study, it can be concluded that TIRAP S180L polymorphism affects the causation of malaria due to Plasmodium falciparum. The failure of PCR amplification in a substantial proportion of the samples indicates the presence of other alleles in local population of Pakistan. Further studies may assist in the ide.jpgication of other alleles at the same locus.