Clear cell urothelial carcinoma of the urinary bladder - a rare pathological entity. A case report and a systematic review of the literature

The most common histological type of urinary bladder cancer is urothelial carcinoma (UC). In contrast, the clear cell variant of urothelial carcinoma (CCUC) is quite a rare neoplasm. In this study, we report a case of an 81-year-old male, presenting with gross hematuria and acute urinary retention, which was subsequently diagnosed with CCUC at our pathology department. Furthermore, we provide a short systematic review of the literature (PubMed, Scopus, and Science Citation Index) for this rare histopathological entity and a brief discussion about its morphological and immunohistochemical (IHC) characteristics. 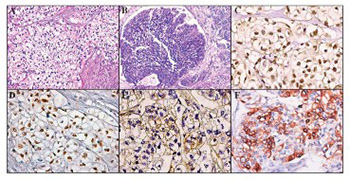 Cancer affecting the urinary bladder is a prevailing disease worldwide, with epidemiological studies reporting its incidence at 541,000 cases per year globally, and approximately 150,000 deaths per year [1]. The most common histological types of bladder cancer - urothelial carcinoma (UC) and its ten different variants recognized by WHO [2], squamous cell carcinomas, adenocarcinomas, and undifferentiated carcinomas [2] have been extensively described. In contrast, clear cell urothelial carcinoma (CCUC) of the urinary bladder is a rare neoplasm; to our knowledge, with only 13 cases reported in the literature [3-13], including our case at the time of this review.

An 81-year-old male presented to our hospital with gross hematuria and acute urinary retention. Computed tomography (CT) scan revealed an 7.5/7/4 cm exophytic mass arising on the posterosuperior aspect of the urinary bladder, extending beyond the bladder wall, infiltrating the perivesical fat with no evidence of metastasis. Transurethral resection of the urinary bladder tumor (TURBT) was performed, a diagnosis of CCUC was established, and a radical cystoprostatectomy was decided.

The gross examination of the resection specimen revealed a large and hemorrhagic exophytic urinary bladder mass involving the posterior wall and extending to the dome of the bladder, invading the perivesical adipose tissue (Figure 1).

Microscopic examination of the tumor revealed sheets of polygonal cells with abundant clear cytoplasm (>95% clear cell differentiation), marked nuclear pleomorphism, and low mitotic activity (Figure 2A), while 5% of tumor showed features of high-grade urothelial carcinoma. No glandular/tubular differentiation and no hobnail cells were observed. Large areas of tumor necrosis were present with scant calcifications. The microscopic evaluation confirmed the infiltration of the perivesical adipose tissue. Perineural invasion and vascular invasion were also noted. Urothelial carcinoma in situ (CIS) was identified in both ureters. The evaluation of the regional lymph nodes showed metastatic deposits of infiltrating CCUC in 4 out of the 11 lymph nodes examined.

The CCUC affecting the urinary bladder is a rather new and sporadic diagnosis encountered in the pathology of urinary tract tumors. Limited reports have been made since 1995 when it was first described by Kotliar et al. [3] as a recognizable variant of urothelial carcinoma. Frequently, clear cell components are encountered in UC; however, Knez et al. [11] were the first to use a cut-off percentage (~90%) of clear cells to differentiate CCUC. Due to the limited knowledge regarding CCUC, as a pathologic entity and its prognosis, the true incidence of CCUC is uncertain. However, a three-fold increase in published cases is observed starting from 2010. This can be due to an increase in IHC use, more reliable antibodies, better scientific communication, and a better understanding of the pathology of bladder tumors.

Clear cell carcinomas may occur in almost any site, making the differential diagnosis problematic. Taking into consideration that the clear cell tumor was located in the urinary bladder, our first differential diagnosis was with clear cell adenocarcinoma of the urinary bladder. In our case, the tumor presented a solid, sheet-like growth pattern (Figure 2A) and was PAX8 negative. In contrast, clear cell adenocarcinoma is PAX8 positive [11,14-16], and it can have a solid growth pattern with glandular differentiation and tubulocystic or papillary morphology, with or without hobnail cells [2,16]. Based on the negative reaction of the tumor cells for RCC, HMB-45/S-100, PSA, PLAP, and vimentin, secondary involvement of the urinary bladder by clear cell carcinoma of the kidney, melanoma, prostate cancer, seminoma, or by clear cell sarcoma was excluded. Aspects which were confirmed by whole-body CT – scan results. Moreover, the presence of high-grade urothelial carcinoma and CIS favored the diagnosis of a primary tumor.

The tumor cells were focally positive for PAS (Figure 2B), confirming the presence of cytoplasmic polysaccharides, such as glycogen, and not mucin or lipids. Regarding this aspect, Kotliar et al. [3] suggested that the loss or the focal positivity for PAS/PAS-D could be correlated with the tumor grade, more precisely with a poorly differentiated, aggressive tumor, a feature that was noticed in our case as well.

Mai et al. [13] observed that the expression of basal cell markers CK5 and CD44 in CCUC, indicating a basal-like phenotype of the tumor cells, is consistent with an aggressive behavior. Based on these criteria, our patient fitted the expected outcome, with aggressive and rapid clinical evolution of the disease and the development of bone metastases, followed by death 5 months after the initial diagnosis was established.

In conclusion, CCUC is a rare variant of UC; to our knowledge, the present case is the first reported case in Romania. The differential diagnosis with more common malignant primary tumors, as well as metastatic lesions, should be made based on the correlation of histological aspects and histochemical and IHC staining. CCUC has a higher incidence in the elderly (eighth decade of life), typically affects male patients, requires an aggressive treatment, and has a variable outcome.

To properly characterize CCUC as a pathological entity, we need to study in detail more cases. Moreover, tumor behavior needs to be defined, and a uniform therapeutic guideline must be established.