Cold fluid infusions can be used to induce mild therapeutic hypothermia after cardiac arrest. Fluid temperature higher than 4°C can increase the volume of fluid needed, prolong the induction phase of hypothermia and thus contribute to complications. We performed a laboratory experiment with two objectives. The first objective was to analyze the effect of wrapping fluid bags in ice packs on the increase of fluid temperature with time in bags exposed to ambient conditions. The second objective was to quantify the effect of insulating venous tubing and adjusting flow rate on fluid temperature increase from bag to the level of an intravenous cannula during a simulated infusion. The temperature of fluid in bags wrapped in ice packs was significantly lower compared to controls at all time points during the 120 minutes observation. The temperature increase from the bag to the level of intravenous cannula was significantly lower for insulated tubing at all infusion rates (median temperature differences between bag and intravenous cannula were: 8.9, 4.8, 4.0, and 3.1°C, for non-insulated and 5.9, 3.05, 1.1, and 0.3°C, for insulated tubing, at infusion rates 10, 30, 60, and 100 mL/minute, respectively). The results from this study could potentially be used to decrease the volume of fluid infused when inducing mild hypothermia with an infusion of cold fluids. 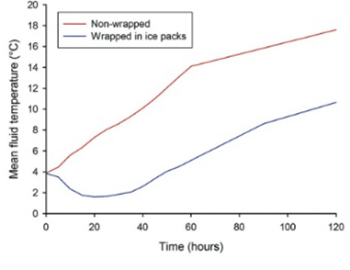 Targeted temperature management is an important part of the post-resuscitation care of comatose survivors of cardiac arrest. Mild induced hypothermia (MIH) at a temperature 32-34°C after cardiac arrest seems to increase the likelihood of neurologically intact survival [1-3]. Induction of MIH by infusion of cold fluid is simple, cheap, does not require special equipment, and can be performed in a pre-hospital environment, emergency department, or an intensive care unit setting [4,5]. Patients who received greater volumes of cold fluids in the induction phase of MIH required higher levels of positive end-expiratory pressure, a higher fraction of inspired oxygen and more diuretics due to pulmonary edema. Thus, it seems reasonable to try to achieve the target temperature with the least possible volume of fluid [6]. To do so, the temperature of fluid actually entering the patient should be as close to the recommended 4°C as practically possible [1].

In this laboratory study, simulated experiments were performed with the intention of optimizing MIH induction with the infusion of cold fluids.

We performed two simulated experiments aiming to qua.jpgy: (1) The effect of wrapping a standard 500 mL fluid bag of normal saline in an ice pack on the rate of warming of fluid in the bag. Qua.jpgication of the effect of wrapping bags in ice packs on the warming rate of fluid was performed with bags wrapped in ice packs and non-wrapped control bags. (2)The effects of venous tubing insulation and infusion flow rate on the infusate temperature rise from the level of the fluid bag to the level of the intravenous cannula at ambient conditions. Measurements of fluid temperature were performed with insulated (wrapped in household aluminum foil) and non-insulated control venous tubing at different flow rates.

All measurements were performed at the ambient temperature of 23°C, at a constant humidity of 40% and without exposure to direct sunlight. 500 mL bags containing normal saline (0.9% sodium chloride, B Braun Melsungen AG, Germany) were stored in refrigerated conditions for at least 24 hours prior to usage, maintaining fluid temperature as close to 4°C as possible in all cases (3.96°C ± 0.17°C).

For the analysis of the warming rate of fluid in the bag, 500 mL normal saline bags were removed from the refrigerating compartment immediately before measurements. They were equipped with a digital filament thermometer (digital thermometer GTH 1160, Greisinger electronic, Germany). The fluid temperature inside the bags was recorded at 5 minutes intervals for 120 minutes while the bags were exposed to ambient conditions. Temperature measurements were made with three non-wrapped fluid bags and three fluid bags wrapped in ice packs.

The effect of flow rate and tubing insulation on the temperature difference between the bag and the intravenous cannula was analyzed via repeated simultaneous measurements of temperature both inside the saline bag and in the venous cannula at different flow rates. The fluid bags were removed from the refrigerating compartment immediately before the experiment and connected to standard intravenous infusion lines (Braun Intrafix® SafeSet, B Braun Melsungen AG, Germany, length 180 cm, standard lumen diameter 3.0 mm) with standard 17 gauge intravenous cannulas (BD Venflon™, Becton Dickinson and Company, USA; inner diameter 1.067 mm, maximum flow rate 140 mL/minute). Measurements were performed only for a short period of time during which the temperature of the fluid bag was maintained as close to 4°C as possible (<5 minutes). Flow rates of 10, 30, 60, and 100 mL/minute were achieved by adjusting the elevation of the saline bag relative to the intravenous cannula. Flow rates were set by measuring the volume of fluid in a standard measuring glass graduated to 1 mL that accumulated in 10 seconds. 10 measurements were performed at every flow rate, with a fresh fluid bag, infusion line, and intravenous cannula set for each flow rate. Temperature measurements were made with one digital filament thermometer placed inside the bag and one digital filament thermometer placed inside the intravenous cannula. One set of measurements was performed for non-insulated and a second set of measurements was performed for insulated venous tubing. We used household aluminum foil (S-Budget, Spar, The Netherlands; thickness 0.01-0.02 mm) for insulation of venous tubing.

For the analysis of the effect of wrapping bags in ice packs on the rate of warming, we investigated significant differences in the mean temperatures between fluid bags wrapped in ice packs and non-wrapped fluid bags with the Student’s independent samples t-test at different time points.

For the analysis of the influence of flow rate on temperature differences between the bag and the cannula, we used the nonparametric Kruskal–Wallis omnibus test in the first step and Student-Newman-Keuls all pairwise post-hoc test in the second step to analyze differences between different flow rates. For comparison between insulated and non-insulated venous tubing, the Mann–Whitney test was used to compare pairs at each flow rate.

For insulated as well as for non-insulated venous tubing, temperature differences between cannula and bag was statistically significantly different for different flow rates (p<0.001). More specifically, for both tested groups, the temperature differences at higher rates were statistically significantly smaller for every pair of successive rates (i.e. 30 vs. 10, 60 vs. 30, and 100 vs. 60 mL/minute).

Changes in fluid temperature are depending on ambient temperature, insulation, and flow rate in the setting of MIH induction with the infusion of cold fluids have only been investigated under laboratory conditions.

Our data are qualitatively in line with previous studies regarding the effect of tubing insulation on fluid temperature gain from the bag to the cannula. In addition, our study demonstrates in a quantitative manner that the increase in fluid temperature is inversely proportional with the flow rate through the tubing, which has not been investigated so far. In our study, the temperature differences at higher rates were statistically significantly smaller for every pair of successive rates. To induce mild therapeutic hypothermia as fast as possible and with the least volume of fluid, we suggest administering the fluid at highest practically achievable flow rates (i.e., around 100 mL/minute) through insulated venous tubing. When no dedicated insulating sleeves are available, the simple aluminum foil can be used. Aluminum foil has been used for decades for light exposure prevention (e.g., in nitroprusside infusion). We believe that the aluminum foil functions by reflecting radiation from the environmental heat sources and that additionally, under the wrapping around the tubing a thin layer of air is formed, which acts as an insulator against convective heat transfer. Aluminum foil not only proved effective but is also cheap and universally accessible.

In our opinion, the efficiency of cold fluid infusion can be further augmented by wrapping bags of fluid in ice packs, which decreases the fluid temperature during the first minutes after wrapping and significantly attenuates the rate at which the temperature of the fluid in the bag rises afterwards (Figure 1).

Polderman described the induction phase of MIH as the phase which presents the most patient management problems, such as frequent adjustments in ventilator settings and sedation dosing, insulin, vasoactive, and electrolyte replacement therapy, and should therefore be executed rapidly, so that a more stable maintenance phase is reached as quickly as possible [10]. Infusion of 30 mL/kg of fluid cooled to at least 4°C, as recommended by the current guidelines is popular for its low costs and simplicity of usage, as it allows a successful performance of MIH in the hospital and pre-hospital environment and during complex procedures, such as primary percutaneous coronary intervention. However, despite its wide applicability, its potentials are still not used in entirety [11,12].

Our experiments were carried out in a controlled environment of a laboratory and were a simulation only. To evaluate the effects of measures studied in this paper on volume of fluid and time needed for cooling of patients, the incidence of complications and survival, a clinical study is called for.

When inducing MIH with the infusion of cold fluids, to use lower volumes and possibly prevent complications due to hypervolemia, temperature of the fluid needs to be as low as possible. Based on our quantitative analysis, we suggest that bags of cold fluid be taken from the refrigerator just before starting the infusion and wrapped in ice packs to prevent warming. In addition, insulated venous tubing sets and high flow rates (at least 100 mL/minute) shall be employed to avoid an excessive rise in fluid temperature from bag to the cannula. Our results performed using simple aluminum foil are in line with results published by other authors using dedicated insulation sleeves [7-9].