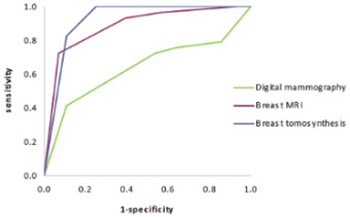 The only imaging modality that has been proven to significantly reduce breast cancer mortality in age-appropriate asymptomatic women is annual screening mammography. A screening mammogram is an x-ray examination of the breast of an asymptomatic woman, while a diagnostic mammogram is done in a patient with signs or symptoms of breast disease: a possible abnormality detected on screening mammography or other imaging, or prior mammography findings requiring imaging follow-up [1]. However, the sensitivity of mammography can be limited in dense breast tissue, due to the presence of overlapping fibroglandular tissue which reduces conspicuity of abnormalities [2]. Another factor influencing cancer visibility is the tumor growth pattern. Tumors which do not produce a mass are often difficult to detect on mammography [3]. Depending on these two factors, breast density and tumor growth pattern, the false-negative rate of mammography ranges from 8% to 66% in symptomatic women [4].

Digital breast tomosynthesis (DBT) is a new and emerging x-ray imaging modality. Tomographic images from DBT are reconstructed in 3D from multiple low-dose 2D x-ray source projection images, acquired by varying the angle of the x-ray tube. By combining information from different projections, DBT clearly differentiates the adjacent anatomical structures, alleviating the superimposition effect [5]. The projection data sets are not what are usually interpreted by the radiologists, but rather the interpretation is based only on the reconstructed “tomosynthesis” images. Typically, the projection data sets are reconstructed into very thin (e.g. 1 mm) slices for radiologist review [6].

Breast magnetic resonance imaging (MRI) is a useful tool for detection and characterization of breast disease, assessment of the local extent of the disease, evaluation of treatment response, and guidance for biopsy and localization [7]. Reported sensitivity of this modality in detection of invasive breast cancer has approached 100% in several series and that is one of the reasons why breast MRI is important in preoperative staging [8]. The limitation of breast MRI is low-to-moderate specificity ranging from 37% to 97% [9]. Low specificity could be a possible cause of overtreatment [10].

The aim of this study was to investigate the sensitivity and specificity of three methods for early detection of breast cancer: digital mammography (DM), breast MRI, and DBT in comparison to histopathology, as well as to investigate the intraindividual variability between these modalities.

The study was prospective and approved by the Ethical Committee of the Oncology Institute of Vojvodina. Informed consent was obtained from all participating women.

The study population included symptomatic as well as asymptomatic women examined at the Imaging Center of the Oncology Institute of Vojvodina from April 2010 to February 2012. Most of these women were referred from other hospitals for a second opinion after suspicious findings on ultrasound examination or screening mammography.

Breast MRI was performed on 3.0 T MR imaging system (Trio 3.0T; Siemens Medical Systems, Erlangen, Germany), with the patient in a prone position, using a dedicated breast surface coil (8-channel coil, Siemens, Erlangen, GE). Dynamic protocol was performed after the standard bilateral T2W axial and T2W fat saturated sagital sequences with T1W (3D) gradient-echo VIEWS sequences (flip angle of 10°), with a total of seven dynamic acquisitions, one before and six immediately after an intravenous bolus injection of gadolinium-dimeglumine (Magnevist; Schering, Berlin, Germany) equal to 0.1 mmol per kg body weight, followed by 20 ml saline flush, with a slice thickness of 2 mm and an acquisition matrix of 512x512. With this parameter setting we obtained a voxel size of 0.6x0.6x1.7 mm and a temporal resolution of 72 sec per dynamic acquisition. Postprocessing included subtraction and MIP. All lesions were evaluated for their morphologic and kinetic characteristics in a pre- and postcontrast series.

DBT images were acquired on the same dedicated digital mammography unit with x-ray tube rotation through the angular range of 15° (-7.5° to +7.5°) with the breast in standard compression, in both MLO and CC projections, 25-49 kVp, max. 200 mA, selenium (Se) detector 24x29 cm, pixel size 140 µm, aluminium (Al) filter. Image acquisition was performed with a continuous exposure method (pulsed, short exposures during continuous motion of the x-ray tube), with an acquisition time of 5 seconds or less for one breast. Image reconstruction was performed immediately after image acquisition: slice thickness 1 mm, time of reconstruction 2-5 seconds, and a reconstructed pixel size of about 100 µm.

One experienced radiologist (DD), with 10 years of experience in breast imaging, interpreted all the diagnostic modalities. The radiologist was provided with patients’ previous mammographic and ultrasound examinations, in order to ensure a proper clinical setting. Morphologic characteristics of all detected lesions were analyzed in all three diagnostic modalities, and their kinetic characteristics (enhancement curves and peak enhancement) were analyzed using breast MRI. All detected lesions were classified according to the American College of Radiology (ACR) BI-RADS lexicon criteria. The BI-RADS category of each lesion, of each diagnostic method, was compared with the histopathology report. BI-RADS categories 1, 2 and 3 were considered benign, while categories 4 and 5 were considered malignant. The final diagnosis was established by histopathological analysis of core biopsy, vacuum-assisted stereotaxic biopsy or surgical excision specimen.

We used SPSS Statistics for Windows, Version 19.0 for statistical data analysis (IBM Corp., Armonk, NY, USA). We compared the results of all three modalities with the histopathology report. All three diagnostic methods were tested by Cochran’s Q test, and afterwards they were all comparatively analyzed by McNemar’s test.

A receiver operating characteristics (ROC) curve was generated for each diagnostic method. We used options in the SPSS package for the calculation and presentation of the ROC curve in accordance with BI-RADS classification. Cohen’s Cappa test was used for the evaluation of agreement between each diagnostic method and the histopathology report. The ROC curve interpretation was done as described in Park et al. [11]. Cohen’s Cappa coefficient was interpreted based on guidelines from Altman (1991) [12]. Specificity, sensitivity and predictive values were processed in SPSS or MS Excel package (Microsoft, Redmond, WA, USA).

All patients were female. The average age of patients was 53.19 years (ranging from 33-74 years). We evaluated imaging features of 60 breast lesions, depicted using three diagnostic modalities: breast MRI, DM and DBT. Three lesions were excluded from the study due to inconsistent findings, therefore we compared the results of imaging findings in 57 breast lesions with the histopathology report. The dataset consisted of 29 malignancies and 28 benign lesions, as follows: 22 invasive carcinomas (2 lobular, 20 invasive ductal carcinoma), 7 invasive + ductal carcinoma in situ (DCIS), 9 fibroadenomas, 6 fibrocystic changes, 4 sclerosing adenosis, 2 lymph nodes, 2 proliferative dysplasia, 1 fat necrosis, 1 columnar cell hyperplasia without atypia, 1 epithelial hyperplasia, 1 post-surgical scar, 1 radial scar (a border-line lesion which was excised after initial diagnosis at core biopsy, with the same result, and therefore it was considered benign in this study).

Based on the information obtained (Table 1) we analyzed sensitivity, specificity, predictive values and ROC curves, for all three diagnostic methods.

In this study, ROC curve analysis shows an overall diagnostic advantage of DBT over breast MRI and DM, clearly seen when we compare ROC curves for all three analyzed diagnostic methods (Figure 1).

DM has significantly lower sensitivity and specificity than DBT and breast MRI in diagnosing malignant breast lesions. The sensitivity of DBT was 100% in this study, meaning that DBT detected all of the malignant tumors. This factor alone is a significant indication of the superiority of digital DBT over the other two diagnostic methods, especially over the DM.

One of the factors that contribute to false-negative mammography reports, especially in mammographic detection of mass lesions, is breast density. Small, indistinct masses can be easily obscured by dense breast tissue [13].

Normal breast tissue elements that lie outside the plane of the lesion can obscure it, leading to false-negative results and decreasing sensitivity (Figure 2). Conversely, superimposed tissue elements may give the appearance of an abnormality and lead to false-positive results, diminishing the positive predictive value and specificity of the examination [14]. Possible causes of false-positive and false-negative results also include poor positioning or technique, perception error, incorrect interpretation of a suspect finding, subtle features of malignancy, and slow growth of a lesion [15]. Thus, in symptomatic patients with negative mammography additional diagnostic work-up using another breast imaging modality is obligatory.

Distribution and density of fibroglandular breast tissue does not decrease sensitivity of DBT because the overlapping tissue effect is reduced by tomographic technique. Due to the basic principle of DBT which is reducing the anatomical noise, the sensitivity and specificity were increased, thus the lesions were better visualized and more accurately categorized according to the ACR BI-RADS lexicon criteria.

Lesions were easier to distinguish on DBT, and the analysis of margins was also more precise. In several cases superimposed breast tissue caused false positive findings on mammography, later reported as normal breast parenchyma on DBT. Intramammary lymph nodes were best visualized and characterized on DBT, thanks to their typical reniform (kidney bean) shape, fatty hilum and well-defined margins. Intramammary lymph nodes could be mistaken for malignant foci on breast MRI because of the wash-out kinetic curve of postcontrast enhancement.

In classifying breast lesions, the assessment of their margins and the qualitative enhancement intensity (at two minutes or less after contrast administration) are considered the most important features for breast mass characterization on breast MRI. The next most important feature is the qualitative assessment of the enhancement kinetics curve [16]. Specificity of breast MRI imaging is improved when both morphologic and kinetic features are considered in the interpretation. Therefore, the breast MRI imaging technique should be optimized to achieve high spatial and temporal resolution [16].

Breast MRI findings may be complex due to physiologic or postoperative changes, meaning that areas of normal breast parenchyma in premenopausal women may appear focally enhanced, a feature that may lead to a false-positive finding and a decrease of breast MRI specificity. Transiently enhancing foci have been observed in the breasts of many healthy women, especially during the second half of the menstrual cycle. Therefore, to minimize false-positive results, breast imaging should be performed during the first half of the menstrual cycle (days 3-14) [16,18].

According to the literature, generally, a persistent curve is suggestive of benign changes, a wash-out curve is suggestive of malignancy, and a plateau curve might be seen in both benign change and malignancy [19]. The results of our study are in accordance with this information, i.e. 86% of malignant lesions had a wash-out curve, while 14% had a plateau curve and none of the malignant lesions had a persistent curve.

A limitation of this study was its small sample size and the fact that it involved a non-blinded review. For a more accurate evaluation of sensitivity and specificity of all three diagnostic modalities, a larger series of cases should be included with independent reading of images from all three modalities. Further research is needed and the results should be confirmed in large population-based studies.

Our study shows that DBT performs better in detection and characterization of breast lesions compared to DM and breast MRI.