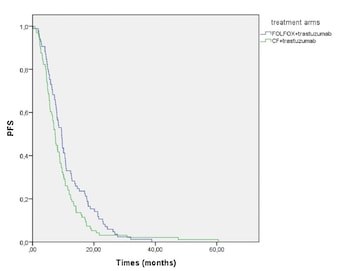 Although the incidence of gastric cancer has decreased in Western Europe and the United States, it still remains a major health problem around the world [1-3]. It is the fifth most common cancer worldwide and ranks third in cancer-related deaths [4].

Human epidermal growth factor receptor 2 (HER2) belongs to the epidermal growth factor receptor family, which plays an important role in the activation of signal transduction pathways that control epithelial cell growth, differentiation [5,6], and angiogenesis [7]. Overexpression of the HER2 and/or HER2 gene amplification can be detected in many solid tumors. In 1998, a significant survival advantage has been achieved with the use of trastuzumab, an anti-HER2-targeted agent, in the treatment of highly aggressive HER2-positive breast cancer [8,9]. The rate of HER2 positivity in gastric adenocarcinoma patients varies between 12% and 23% [10-14]. Unlike in breast cancer, the importance of HER2 overexpression or amplification in gastric cancer prognosis is unclear. While some studies [12,15] have claimed that HER2 positivity has no prognostic significance in gastric cancer patients, some studies have shown that it is related to poor prognosis [10,16].

The study was approved by the Ankara City Hospital Ethics Committee under decision number E1/2174/2021 in compliance with the Helsinki Declaration.

Continuous variables were presented as the median (minimum-maximum) and categorical variables were presented as percentages. Normality of the data was analyzed using the Kolmogorov–Smirnov and Shapiro–Wilk tests. The Pearson chi-square test was used to compare the categorical variables of the two groups, and the independent sample t-test or Mann–Whitney U-test was used to compare the continuous variables of the two groups. The Kaplan–Meier method was used for the survival analysis. p < 0.05 was considered statistically significant. IBM SPSS Statistics for Windows 24.0 (IBM Corp., Armonk, NY, USA) was used for the statistical analyses.

In the study of Gürbüz et al., in which they evaluated maintenance herceptin treatment after chemotherapy in HER2-positive, unresectable, locally advanced or metastatic gastric adenocarcinoma patients, 24 patients received CF+trastuzumab, and 11 patients received mFOLFOX+trastuzumab treatment. All of the patients received a median of 13 maintenance cycles of trastuzumab, with or without capecitabine, after backbone chemotherapy. The median OS was 17.4 months and the median PFS was 12 months. CR was detected in 22% of the patients, PR was detected in 68%, and SD was detected in 8%. In our study, there were 101 patients who continued maintenance trastuzumab after chemotherapy+trastuzumab. The CR rate of the patients was 12.9%, PR rate was 69.3%, and SD rate was 13.9%. The median OS was 23.3 months, while the median PFS was 13.3 (11.6-14.9) months. In both studies evaluating maintenance trastuzumab therapy, OS and PFS seemed to be better in the patients who received maintenance trastuzumab therapy than in the overall patient group. The better response of a group of patients to trastuzumab in the HER2-positive metastatic gastric or GEJ cancer group may be explained by the presence of a different underlying mechanism that increases the response to trastuzumab, other than HER2 positivity. This suggests the difference in tumor biology.

In this study, the rate of discontinuation of treatment due to trastuzumab-related toxicity was 3.3% (8 patients). Treatment was discontinued in 2.8% of the patients due to a low LVEF of grade 3 and above. In the HERXO trial [19], grade 3 and above side effects were observed in 44.4% of patients, asymptomatic LVEF decrease of grade 2 was observed in 2 patients (4.4%), and clinically proven heart failure developed in 1 patient. In another study on patients with metastatic gastric GEJ cancer receiving XELOX+trastuzumab, trastuzumab was discontinued in 6 patients because asymptomatic LVEF decreased below 50%, but no heart failure was reported [21]. In the NSABP-B31 study [23], conducted in breast cancer patients, the rate of development of grade 3-4 heart failure was 1.3% in the chemotherapy (anthracycline and taxane-based chemotherapy)+trastuzumab arm and 4% in the chemotherapy arm. Similarly, in the HERA study [24], conducted in breast cancer patients, a significant LVEF reduction of 4.1% was observed in the arm that received adjuvant trastuzumab for 1 year. It is not possible to conduct a one-to-one comparison because the cytotoxic chemotherapies regimens and the patient population are different in breast cancer and gastric cancer studies, but care should be taken in terms of LVEF reduction and heart failure in patients treated with trastuzumab.

In this study, there were 23 patients with ECOG PS 2. Patients with poor PS (e.g., ECOG PS >2) are known to generally tolerate chemotherapy poorly, regardless of age, but ECOG PS usually does not adequately reflect the degree of functional impairment in patients [27].

Both in the TOGA trial [18] and HERXO trial [19], after six cycles of chemotherapy+trastuzumab, chemotherapy was stopped and trastuzumab treatment continued until progression or adverse toxicity occurred. However, it may be possible to prolong the duration of chemotherapy in addition to trastuzumab in patients who have not developed chemotherapy toxicity and have a high tumor burden.

There were some limitations in this study. First, it was a retrospective study. Second, metastatic patients were included in the study, but information about the metastasis sites and the number of metastases could not be obtained. Third and one of the most important limitations was the unavailability of the chemotherapy side-effect profiles of the treatments from the hospital records. Therefore, no comparison could be made between the two groups in terms of the chemotherapy side-effect profile.

In this study, mFOLFOX+trastuzumab was similar to CF+trastuzumab in terms of OS and it was more effective in terms of PFS in the first-line treatment of HER2-positive metastatic gastric and GEJ cancer patients. The choice of treatment should be made by considering the prominent toxicity findings of the chemotherapy regimens. However, there are still questions regarding the continuation of chemotherapy with trastuzumab in maintenance therapy in patients who do not have any signs of chemotherapy toxicity and respond to treatment. The fact that the median OS and median PFS were better in the patients receiving maintenance trastuzumab suggested underlying HER2 positivity in this patient group, as well as different tumor biology, which will increase the response to anti-HER2 therapy. Further studies are needed to determine the answers to these questions.