Microdeletion syndromes are caused by chromosomal deletions of less than 5 megabases which can be detected by fluorescence in situ hybridization (FISH). We evaluated the most commonly detected microdeletions for the period from June 01, 2008 to June 01, 2015 in the Federation of Bosnia and Herzegovina, including DiGeorge, Prader-Willi/Angelman, Wolf-Hirschhorn, and Williams syndromes. We report 4 patients with DiGeorge syndromes, 4 patients with Prader-Willi/Angelman, 4 patients with Wolf-Hirschhorn syndrome, and 3 patients with Williams syndrome in the analyzed 7 year period. Based on the positive FISH results for each syndrome, the incidence was calculated for the Federation of Bosnia and Herzegovina. These are the first reported frequencies of the microdeletion syndromes in the Federation of Bosnia and Herzegovina.

Hunter AG. Outcome of the routine assessment of patients with mental retardation in a genetics clinic. Am J Med Genet 2000; 90:60–8. 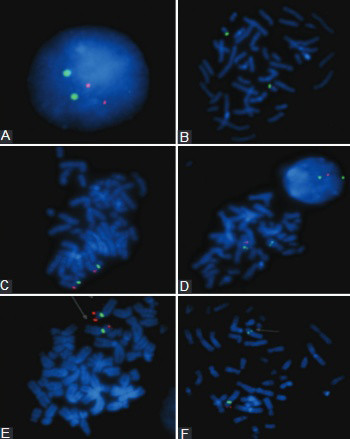 Microdeletion syndromes are caused by chromosomal deletions of less than 5 megabases (Mb). The size and location of a microdeletion vary depending on the specific syndrome. Most microdeletion syndromes result in a loss of a chromosomal segment leading to the haploinsufficiency of a few critical genes or in some cases a single gene [1]. Microdeletions are mostly spontaneous and occur in approximately 5% of patients with unexplained mental retardation [2,3]. They are frequently associated with multiple congenital anomalies and developmental delay [4,5]. The most common microdeletion syndromes are DiGeorge syndrome (22q11.2), Prader-Willi syndrome, Angelman syndrome (15q11-13), Williams syndrome (7q11.23), and Wolf-Hirschhorn syndrome (4p16.3). DiGeorge syndrome is the most frequent microdeletion syndrome with an incidence range from 1:4000 to 1:10000, according to the literature [6-10]. The most common abnormalities include heart defects, hypoparathyroidism, cellular immune deficiency secondary to thymic hypoplasia, cleft palate, learning disabilities, dysmorphia, and microcephaly [7-12].

Because of their small length (<5 Mb), the deletions are difficult to detect using conventional cytogenetic methods and light microscopy. A method that is commonly used for microdeletion detection is fluorescence in situ hybridization (FISH), which is a molecular cytogenetic technique based on fluorescently labeled DNA probes specific for a chromosomal region of interest.

Since the detection of microdeletion syndromes was established 7 years ago in Bosnia and Herzegovina, FISH as a diagnostic tool was evaluated in the period from June 01, 2008 to June 01, 2015. The main goal of this study was to evaluate the significance of FISH as a diagnostic tool in order to create future guidelines for pediatric genetic diagnosis.

During the seven-year period from June 01, 2008 to June 01 2015, 24 pediatric patient samples were received by the Laboratory of human genetics, Department of Clinical Pathology and Cytology, at the Clinical Center of the University of Sarajevo, referred for FISH testing in order to confirm a suspected microdeletion syndrome. All peripheral blood samples were received in heparin tubes and sample volume was 1-3 ml. The samples were processed the same day. Detailed indications were recorded on a form filled out by the referring physician. The peripheral blood was cultivated using standard manufacturer’s protocols (Euroclone, Milano, Italy).

Incidences were calculated based on the positive FISH analyses and the number of the newborn population in Canton Sarajevo (lower limit) and in the Federation of Bosnia and Herzegovina (upper limit). The demographic data was retrieved from the Institute of Statistics of Federation of Bosnia and Herzegovina. We performed statistical analysis using SPSS v.21 (IBM, Armonk, NY, USA).

During the seven-year period 24 pediatric patient samples were received by the Laboratory of human genetics at the Department of Clinical Pathology, Cytology, and Human Genetics, Clinical Center of the University of Sarajevo, referred to FISH testing to confirm the diagnosis of a suspected microdeletion syndrome.

Several patients from Bosnia and Herzegovina sought initial treatment and diagnosis abroad and were diagnosed by FISH at foreign institutions. After the initial diagnosis, those patients continued their treatment at the Pediatric Clinics at the Clinical Centers Sarajevo, Tuzla, and Mostar. We included these cases because of the precise incidence calculations (Table 2). As a result, three cases of Prader-Willi/Angelman syndrome, three cases of Wolf-Hirschhorn syndrome, one case of DiGeorge syndrome, and two cases of Williams syndrome, who were diagnosed outside of Bosnia and Herzegovina, were reported in this study (Table 2, Table 3).

The distribution of microdeletions in the human genome is not random. In many syndromes, the deleted regions are surrounded by relatively long homogeneous repetitive sequences involved in the proposed mechanism [13]. It is suggested that the mechanism for the development of microdeletions involves unequal intra- and inter- chromosomal crossing over between repetitive sequences resulting in the loss and reciprocal microduplication of the interstitial chromosomal segment [14]. Some microdeletion syndromes are very rare, while others are more common such as DiGeorge syndrome, Prader-Willi syndrome, Angelman syndrome, Williams syndrome, and Wolf-Hirschhorn syndrome. Since no other studies have reported the incidence of microdeletion syndromes for this region, we calculated the incidences based on our FISH data for the seven year period from June 01, 2008 to June 01, 2015.

The phenotype of patients with DiGeorge syndrome is highly variable. The most common abnormalities include heart defects, hypoparathyroidism, cellular immune deficiency secondary to thymic hypoplasia, cleft palate, learning disabilities, dysmorphia, and microcephaly. The majority of patients demonstrated a deletion of 3 Mb [10-12]. In our study, we diagnosed 3 patients with DiGeorge syndrome in the period from 2008 to 2015, and included one case diagnosed outside of Bosnia and Herzegovina. Thus, the incidence based on the FISH results for DiGeorge syndrome was 1:8637-1:39633 in FB&H, while the published European incidence was in the range from 1:4000 to 1:10000 (Table 3) [6-10]. The upper limit of the FB&H (1:8637) incidence is similar to the European incidence and probably is closer to the true value for this region. The lower limit is very high, possibly due to the fact that some patients might be diagnosed abroad and treated at other regional centers in the Federation of Bosnia and Herzegovina.

Prader-Willi syndrome (PWS) is caused by 4 Mb microdeletion in the 15q11-q13 region. The clinical presentation is characterized by hypotonia, hyperphagia, mental retardation, and dysmorphism. Approximately 75% of the affected individuals have the deletion in 15q11-q13. In all these cases, the paternally derived chromosome has been deleted. Maternal uniparental disomy accounts for further 20%. The remaining 5% are due to a mutation in the imprinting center or to a chromosomal translocation involving proximal 15q. Whereas the origin of the deleted chromosome 15 is paternal in PWS, it is always maternal in Angelman syndrome (AS) [11-16]. The clinical features include microbrachiocephaly, dysmorphia, hypopigmentation, hypotonia, severe mental retardation, epilepsy, paroxysms of inappropriate laughter, and sleep disorders. Several genetic abnormalities are found in the 15q11-q13 region, including: a de novo interstitial deletion of maternal 15q11-q13 in ~75% of cases (4 Mb deletion), paternal uniparental disomy in 2%, an imprinting center mutation in 2%, and a point mutation in E3 ubiquitin protein ligase gene (UBE3A) in 5-10% [11]. In the calculation of the FB&H incidence based on the FISH results of PW/A syndrome, we included three cases diagnosed outside of Bosnia and Herzegovina. As a result, the incidence based on the FISH results of Prader-Willi/Angelman syndrome in FB&H ranged from 1:8637-1:39633, as compared to the European incidence of 1:15000-1:30000 (Table 3).

Williams syndrome (WS) is caused by a 2 Mb deletion in the 7q11.23 region which includes 17 genes. The main clinical findings are moderately retarded intrauterine and postnatal growth with moderate microcephaly, a characteristic face with full lids and orbitae, frequent strabismus, irregularly positioned and small teeth, and a hoarse voice [10]. The microdeletion in 7q11.23 causes a loss of the gene for elastin (ELN), which is responsible for supravalvular aortic stenosis and other vascular stenoses [11]. In the calculation of the FB&H incidence of William syndrome based on the FISH results we included two cases diagnosed outside of Bosnia and Herzegovina. This resulted in the FB&H incidence in the range from 1:11517-1:52844, while the European incidence was 1:7500-1:10000 (Table 3). The upper limit of the FB&H (1:11517) incidence is similar to the European incidence and probably is closer to the true value for this region.

Wolf-Hirschhorn syndrome (WHS) is caused by a deletion in the 4p16.3 region. The prevalence of WHS is reported to be around 1:50000 live births with a 2:1 female/male ratio; however, this is likely underestimated because of under-recognition or misdiagnosis of the affected individuals [17]. The typical clinical features include growth restriction of prenatal onset, profound psychomotor retardation, seizures, skeletal abnormalities, and a distinctive facial appearance including a broad, flat nasal bridge and a high forehead, eyes widely spaced and protruding. Additionally, the affected individuals may have asymmetrical facial features and an unusually small head (microcephaly) [10,18,19]. The signs and symptoms of WHS are related to the loss of genes WHSC1, LETM1, and MSX1 (20). In the calculation of the FB&H incidence based on the FISH results of WHS syndrome we included three cases of this syndrome diagnosed outside of Bosnia and Herzegovina, and the calculated FB&H incidence ranged from 1:8637-1:39633, which is a higher incidence compared to the European incidence of 1:50000 (Table 3).

The calculated incidences for the common microdeletion syndromes in FB&H are the first reported in the literature. However, we have to emphasize that the microdeletion syndromes are in general underdiagnosed. For example, not all patients with cardiac abnormalities are tested for DiGeorge and Williams syndromes, thus, the calculated incidences are likely to be lower. Furthermore, a small number of patients with DiGeorge syndrome have a deletion in the 10p13-14 region which was not tested in this study. Similarly, only a small fraction of patients with PraderWilli/Angelman syndrome with mental retardation are tested cytogenetically, which leads to a smaller number of diagnosed patients. In general, these results can serve as a preliminary basis for creating future guidelines for pediatric genetic diagnosis. Precise analysis and identification of microdeletion syndromes are of practical use in the diagnostics, and of scientific interest, since they allow the study of the interface of genetic imbalances and associated clinical characteristics.