While opioid receptors have been implicated in the development of tolerance, the subsequent mechanisms involved in these phenomena have not been completely understood. The purpose of this study was to investigate effects of D1/D2 dopamine receptors antagonist perphenazine on morphine analgesia and tolerance in rats.

Male Wistar albino rats weighing 190–205 g were used in these experiments. To constitute of morphine tolerance, animals received morphine (50 mg/kg) once daily for 3 days. After last dose of morphine was injected on day 4, morphine tolerance was evaluated by the analgesia tests. The analgesic effects of perphenazine (1, 5, and 10 mg/kg), D1-dopamine receptor antagonist SCH 23390 (1 mg/kg), D2-dopamine receptor antagonist eticlopride (1 mg/kg), and morphine were considered at 30-min intervals (0, 30, 60, 90, and 120 min) by tail-flick and hot-plate analgesia tests. 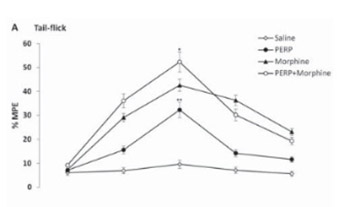