Cyclosporin A(CsA) - induced gingival overgrowth(GO) is a current problem of tissue-specific mechanism which is still incompletely explained. The apoptotic process has been of particular interest like a new concept in the etiology of this unwanted effect.

The aim of our study was to detect the level of apoptosis, expression bcl-2 and p53, associated with the different dosis of CsA. in gingival stroma. A cohort of 84 kidney transplant recipients was divided into four subgroups based on average daily dose of therapeutically applied CsA (Ne-oral®), (100 mg, 125 mg, 150 mg and 175 mg). The control group consisted of 21 patients, clinically diagnosed with periodontitis, who were not subjected to any medicamentous treatment causing gingival overgrowth.

The following indexes were analyzed: plaque index (PI), index of gingival inflammation (GI) according to Loe-Silnes, and gingival overgrowth index (GOI) according to MacGaw et al. The tissue samples were subjected to a semiquantitative analysis to detect apoptotical cells and imunohistochemically stained to detect the expression of the bcl-2 and p53 proteins.

Inflammation plays the most important role in the induction of apoptosis and proliferation in gingival tissues. 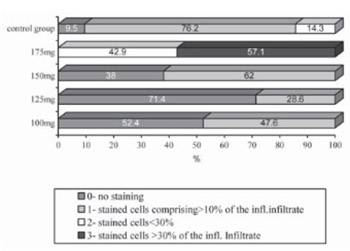