Division of Biomedical Statistics and Informatics 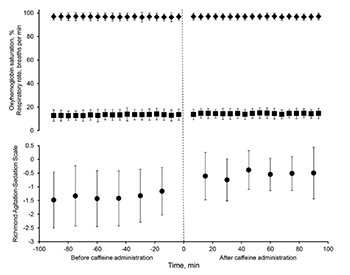 Caffeine, a mild central nervous system stimulant, exerts its effect vis-à-vis antagonism of the adenosine receptors with a resultant increase in dopaminergic activity [1]. In moderate doses, it enhances cognitive function and alertness [2,3]. A murine model found caffeine expedites recovery following both isoflurane- and propofol-based anesthetics [4]. Caffeine administration has been shown to decrease symptoms of acute caffeine withdrawal during anesthetic recovery [5], but otherwise has not been well studied if it can hasten anesthetic recovery. At our institution, several practitioners have developed an informal practice of administering intravenous caffeine to heavily sedated patients in the post-anesthesia care unit (PACU). Despite anecdotal reports of improved alertness, this practice has not been audited. The aim of this study was to review the course of these patients to determine if caffeine administration was associated with improvement in consciousness. Ultimately, this would help determine the feasibility of designing a prospective trial. Because caffeine also increases resting ventilation and augments the ventilatory response to hypercapnia and hypoxia [6], a secondary aim of this study was to determine associated changes in respiratory rate (RR) or oxyhemoglobin saturation (SpO2) following caffeine administration.

This study is representative of the surgical practice of the two major hospitals (St Mary’s Hospital and Rochester Methodist Hospital) within the Mayo Clinic Rochester Practice, a tertiary-referral academic institution, from January 1, 2012 through December 31, 2014. This study was approved by the local Mayo Clinic Institutional Review Board and, consistent with Minnesota Statute 144.295, only patients who provided authorization for research use of their medical records were included.

The electronic anesthetic database was queried to identify patients who were admitted to the PACU for Phase I recovery from general anesthesia and administered intravenous caffeine. Patients who were under 18 years of age or who underwent obstetric, cardiothoracic or cardiac catheterization procedures were excluded.

The PACU is staffed by registered nurses trained in Phase I anesthesia recovery with an attending anesthesiologist immediately available. The larger PACU (St Marys Hospital) is also staffed by an anesthesia resident. Vital signs including RR and oxyhemoglobin saturation as measured by pulse oximetry are automatically recorded every 5 minutes into the electronic medical record. Consciousness is assessed using the Richmond Agitation-Sedation Scale (RASS) [7] upon admission and discharge from the PACU as well as clinically indicated (e.g., in a heavily sedated patient). The RASS is an assessment tool to quantify the degree of sedation or agitation and is scored on a 10-point scale from -5 (unarousable) to + 4 (combative) with a score of 0 that equates an alert and calm patient [7]. Discharge criteria for Phase I recovery were primarily based on standard discharge criteria [8], goal pain scores and control of postoperative nausea, as well as specific measures of respiratory depression, as previously described [9].

The practice of caffeine administration is informal. Decision regarding its use is left to the discretion of the attending anesthesiologist based on clinical judgement. At the study institution, intravenous caffeine is available as caffeine sodium benzoate (125 mg caffeine, 125 mg sodium benzoate per ml).

This study found an association between the administration of caffeine and an increase in RASS scores in post-surgical patients. Whether these changes were secondary to caffeine administration or the natural course of anesthetic recovery is uncertain, however, an effect is suggested as there was no meaningful trend in RASS scores over time. Notably, these findings are consistent with murine models assessing the impact of caffeine on emergence from general anesthesia [4,10]. Caffeine sodium benzoate, the intravenous caffeine formulation used in this study, contains 125 mg of caffeine and 125 of sodium benzoate per ml (250 mg total dose per ml), with sodium benzoate serving to increase the solubility of caffeine. Caffeine competitively inhibits phosphodiesterase, resulting in increased intracellular cyclic adenosine monophosphate (cAMP) levels [10]. Additionally, caffeine serves as an adenosine receptor antagonist [11]. Both adenosine inhibition and increased cAMP are thought to mediate the stimulatory effects of caffeine on the central nervous system, which in turn may be associated with enhanced recovery from general anesthesia [12]. As an example, a previous murine model found 60% reduction in recovery time from 2% isoflurane anesthesia with the administration of 25 mg/kg of intravenous caffeine [4]. At this time, similar studies in human subjects are lacking.

Based upon results from this investigation, a prospective trial of caffeine versus placebo for emergence from general anesthesia may be designed. To conduct such a study with the primary endpoint being change in RASS score, a sample-size of N = 60 patients per group would provide statistical power (two-tailed, alpha = 0.05) of 80% to detect a differential change between groups of 0.5 units. While no adverse cardiac events were noted following caffeine administration, a substantial number of patients did exhibit signs of restlessness with one even experiencing agitation following its administration. There was no demonstrable association between caffeine administration and change in respiratory parameters. This is in contrast with a human study where 650 mg of oral caffeine was shown to be a respiratory stimulant [6]; however, the doses used clinically in this study (equivalent to 1-2 cups of coffee) were considerably lower.

There are several notable limitations to this investigation. First, this is a retrospective evaluation of caffeine administration to a diverse cohort of surgical patients. Caffeine administration was given at the discretion of the covering anesthesiologist rather than by protocol. Additionally, caffeine may have been given for reasons other than excessive sedation (e.g., headache). No baseline information was available on preoperative caffeine consumption, and it is possible that responses to caffeine postoperatively may be influenced by preoperative caffeine consumption. Most notably, this pilot study is limited by the absence of a control group of similarly sedated patients that did not receive caffeine postoperatively. Hence, it is unclear if trends in RASS improvement following caffeine were truly related to the intervention. Future studies utilizing a comparative drug or placebo would be tremendously helpful in further assessing the impact of caffeine on arousal following general anesthesia. Furthermore, this study was not designed to analyze adverse events related to caffeine administration, including drug-drug interactions or direct caffeine-induced adverse effects. However, we did review patient records for the presence of tachyarrhythmia or cardiac ischemia following caffeine administration, finding no evidence for either. Lastly, we did not review the impact of the type of anesthesia (including specific anesthetic agents) on responses to caffeine administration. Future studies would benefit by standardization of perioperative anesthetic techniques.

Dr. Weingarten currently serves as a consultant to Medtronic in the role as chairman of the Clinical Endpoint Committee for the Prodigy Trial; has received research support from Respiratory Motion (study equipment) and unrestricted investigator-initiated grant from Merck. The other authors declare no conflict of interests.