The effects of tadalafil on renal ischemia reperfusion injury: an experimental study

Many pharmacological agents were investigated for the prevention of renal ischemic reperfusion (I/R) injury as well as the phosphodiesterase (PDE) inhibitors. The aim of the study was to examine the possible renoprotective effect of a member in this family, tadalafil (Td) on I/R injury. Thirty-six Spraque Dawley rats were allocated to six groups as; control, sham, ischemia (I), ischemia/reperfusion (I/R), Td pretreatment ischemia (Td/I) and Td pretreatment ischemia/reperfusion (Td/IR) groups. Right nephrectomy was performed in all groups. Td was dissolved in saline solution and given as a single dose (1mg/kg) through an orogastrictube 60 min before the operation in the Td pretreatment groups. In ischemia group the left renal pedicle was occluded for 45 minutes and after than underwent left nephrectomy. In I/R group left renal pedicle was occluded for 45 minutes, reperfused for 1 hour and after then underwent nephrectomy. The left kidneys were evaluated after standard laboratory procedures with regard to tubular morphology, and leukocyte infiltration. The data were analyzed by using Kruskal–Wallis test to determine differences among the groups. A p value of < 0.05 was considered significant.

Td administration prior to the renal I/R injury attenuated these morphological disarrangements, which were observed in renal I/R. Tubular necrosis, which may be considered as an important issue of the developing renal injury, was also completely prevented with Td administration. 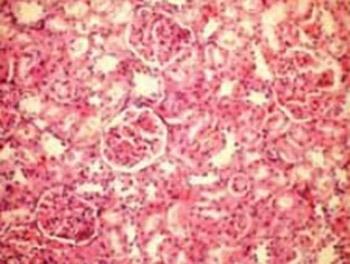