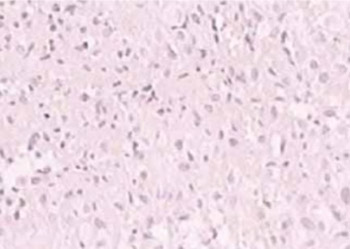 Chemotherapy plays a key role in the comprehensive treatment of osteosarcoma. It has significantly increased the 5-year survival rate of osteosarcoma patients as well as the success rate of limb salvage surgeries. Nowadays, Cis-diaminodichloroplatinum (CDDP) has been widely used in chemotherapy in treatment for bone and soft tissue malignancy, but the problem of drug resistance has not yet been completely solved via this protocol. Results of intensive study on cell and molecular biology indicate that, to a large extent, the drug resistance of tumor cell are caused by two aspects. On the one hand, gene MDRL encoding protein P-gp can actively transport the chemotherapeutic agents outside the cell, thus reducing the intracellular effective concentration, which makes the tumor cell escape the cytotoxicity of drugs. On the other hand, the strong repair function of tumor cell can significantly weaken the therapeutic effect of drugs. How to predict and conquer drug resistance of tumor cell is of great importance in tumor therapy. Many studies have demonstrated that MGMT can rapidly repair alkylating damage of DNA, which is the main reason of tumor cell to develop drug tolerance [1-2]. Researchers around the world have conducted individualized clinical experiments based on inhibiting MGMT activity as well as the rational use of alkylating agent [3-5]. MGMT can repair methylation and alkylation damage of guanine base in DNA, thus counteracting the killing effect of alkylating agent on tumor cells, which is a main determinant of resistance of tumor cells to chemotherapeutic alkylating agents. It was found that there was a negative correlation between high level of MGMT expression in tumor tissue and curative effect of alkylating agents [7]. Therefore, in this comparative study, we have investigated the relationship between MGMT expression and the curative effect of CDDP on osteosarcoma.

Between January 2002 and April 2008, 76 patients with osteosarcoma (aged between 9 to 43 years old, no other pathological types of tumors were found in these patients) were eligible for this study. After admission, pre-treatment pathological tissue samples were collected, MGMT protein detections were conducted, and they were classified according to histopathological types of osteosarcoma. All patients were administrated with CDDP (120 mg/m2) three times or more than three times. Evaluation of osteosarcoma necrosis rate after chemotherapy was performed. The formula to calculate tumor cell necrosis rate was TCNR=(1-N/M)×100%. The grade of TCNR was divided to four degree: GradeI TCNR≤50%, GradeII 50%<TCNR≤90%, GradeIII 90%<TCNR≤99%, Grade IV=100%[6],

Immunohistochemical staining was conducted according to standard procedure strictly. Samples were observed under light microscope. After dewaxing and dehydration, tissues were formalin fixed and paraffin embedded, then placed into hydrogen peroxide solution (0.3%) for 10 minutes to inactivate endogenous enzyme. After washed off by PBS and blocked, samples were treated with first antibody at 4°C overnight. They were washed off using PBS the next day, and then were incubated with second antibody at 37°C for 30°C for 30 minutes. Finally, samples were washed conventionally, and then were colored using DAB chromogenic reagent. Cell nuclear and cytoplasm were stained by MGMT antibodies. Under microscope, karyoplasms that were brown colored and distinct from the background were considered as positive, conversely, they were considered as negative.

Expression of MGMT in osteosarcoma tissue

Among 76 osteosarcoma biopsy specimens, 52 cases were positive. The semiquantitative analysis is calculated as the percentage of the positive cell in the relation to the total cells in the field (overall positive rate was 68%: 27 (36%) cases (+), 18 (24%) cases (++), 7 (9%) cases (+++). According to pathological types, there were 3 (6%) cases of 22 (42%) cases of osteoblast, 11 (21%) cases of chondroblast, and 16 (31%) cases of fibroblast. As shown in Table 1, χ2 test results demonstrated that there were no significant differences in MGMT expression among different histopathological types (of osteosarcoma p=0.662).

Recently, the increases of 5-year survival rate and the success rate of limb salvage surgery benefit from the important role chemotherapy played in the comprehensive treatment of osteosarcoma. These days, neo-adjuvant chemotherapy has been widely used around the world, but this treatment protocol still cannot solve completely the problem of drug resistance after chemotherapy. The MGMT expressions of the pathological samples of the osteosarcoma and the tumor necrosis rates after chemotherapy have been comprehensively analyzed. It can be concluded from our experimental results that MGMT protein expression has certain significances in the prediction of CDDP chemotherapeutic effect of the osteosarcoma patient. Study show that the antineoplastic alkylating agents could cause DNA base alkylation. The formation of O6-methylguanine is considered to have the most threatening effect on cellular activity. O6-methylguanine can cause G: C→A: T mutation, which results in cell mutation and death. MGMT is a special DNA repair enzyme universally existed in biological organisms from bacteria to mammalian. It functions as transferase and methyl acceptor simultaneously. MGMT can repair guanine damage in DNA by transferring alkylating groups from O6 position to its own cysteine residues before DNA cross-linking, and meanwhile loses its activity irreversibly. Other proteins have not been found to participate in this process so far. Therefore, MGMT is the molecular basis for cells to develop drug resistance to alkylating agents [7-10]. CDDP functions similarly to the double functional groups of alkylating agent by inhibiting DNA synthesis. Preuss et al. [10] have found that tumor cell in which MGMT has high level of activity is resistant to CDDP, whereas tumor cell is sensitive to CDDP when MGMT activity is low. Bruheim et al. [11] studied the relationship between MGMT activity and the curative effect of two chemotherapeutic drugs (cytoxan (CTX) and CDDP) on tumor xenografts. They inoculated 14 tumor cell lines into right armpits of nude mice, and then injected CTX and CDDP respectively. Results showed that the higher the MGMT activity was, the less sensitive the tumor cell to CTX. No such correlation was found with CDDP. Eichhorn et al. [12] demonstrated that drug resistance of tumor cell to chemotherapeutic agent CTX was positively correlated with MGMT expression. There are no significant differences in MGMT expression among different pathological types (p>0.5) according to our detection results. We have analyzed MGMT expressions in osteosarcoma biopsy specimens and necrosis rates that indirectly reflect curative effects of chemotherapy. We have found that MGMT expression is negatively correlated with osteosarcoma necrosis rate after chemotherapy (p<0.01). Necrosis rate of tumor samples with negative or weak positive MGMT expression is higher than that with strong positive expression. Although the mechanism of tumor cells having the potential to develop resistance to chemotherapeutic alkylating agents has not been completely understood, exciting advances have been achieved in curative effect of treatment in some tumor cell lines by inhibiting MGMT activity combined with alkylating administration. Detection of the level of MGMT activity helps to make the alkylating chemotherapy for the treatment of osteosarcoma and other carcinomatous diseases more predictably.