Most pharmaceutical formulations also include a certain amount of lubricant to improve their flowability and prevent their adhesion to the surfaces of processing equipment. Magnesium stearate is an additive that is most frequently used as a lubricant. Magnesium stearate is capable of forming films on other tablet excipients during prolonged mixing, leading to a prolonged drug liberation time, a decrease in hardness, and an increase in disintegration time. It is hydrophobic, and there are many reports in the literature concerning its adverse effect on dissolution rates.

The objective of this study was to evaluate the effects of two different concentrations of magnesium stearate on dissolution properties of ranitidine hydrochloride coated tablet formulations labeled to contain 150 mg. The uniformity content was also checked.

During the drug formulation development, several samples were designed for choice of the formulation. For this study, two formulations containing 0,77 and 1,1% of magnesium stearate added in the manufacture of cores were chosen. Fraction of ranitidine hydrochloride released in dissolution medium was calculated from calibration curves. The data were analyzed using pharmaco-peial test for similarity of dissolution profiles (f2 equation), previously proposed by Moore and Flanner. 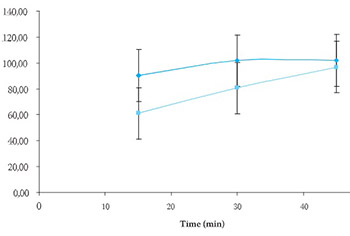