A large number of physical and chemical agents are capable to course chromosomal aberrations. Ionizing radiation is frequent and well known course of chromosomal aberrations. If deoxyribonucleic acid (DNA) is irradiated before synthesis chromosomal-type aberrations are caused. Chromatid-type aberrations are results of DNA damages occurred during or after synthesis. Some of these changes could exist at patients several years after exposition. Biological dosimetry-cytogenetics analysis of persons occupational exposed to ionizing radiation in Federation of Bosnia and Herzegovina have been carried out in "Center for Human Genetics" of Medical Faculty in Sarajevo. In this study we have evaluated cytogenetics findings of persons employed in a zone of radiation. Cytogenetics findings have been demonstrated in allowed limit in 154 (81.1%) examinees, and cytogenetics findings were out of normal values in 36 (18.9%) examinees. The majorities who have been employed in a zone of ionizing radiation were in age group 40-44 (25.3%) and age group 45-49 (24.7%). Radiological technicians (35.7%) were exposed the most to ionizing radiation, than clinical nurse specialists (14.7%), radiologists (11.1), physicians (7.4%) machines technicians (6.3%), pneumologists (4.7%), orthopedists (4.2%) and scrub nurses (4.2%). Biological dosimetry-cytogenetics analysis have been carried out at 108 (56.8%) male and 82 (43.2%) female examinees. The most frequent aberration have been presented with 26.8% in the form of acentric fragments, than chromatid fragments with 21.2%, dicentric chromosomes with 19.5%, gaps with 18.7%, minutes with 12.2% and inter-arm interchanges with 1.6%. 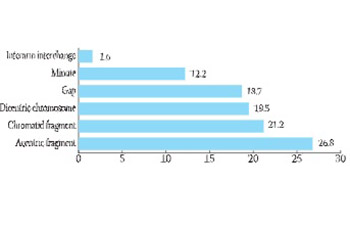