Growth hormone exerts several metabolic effects, including effects on proteins, fats and carbohydrates. Among the many metabolic activities of GH, two contradictory actions were described: acute and early insulin-like activity and chronic and late anti-insulin like activity also called diabetogenic activity. A dramatic increase in plasma concentration of GH was found during endurance exercise, but its role during exercise is not well known. According to its metabolic effects a possible role of growth hormone may be in maintenance of glucose level during exercise. The aim of this study was to analyze dynamics of changes in GH and glucose levels during acute workload and in the recovery period, in a group of well trained athletes. All the subjects exercised for 30 minutes on cycle ergometer in sitting position (work intensity 50% of VO2 max, RPM 60/min). Serum GH concentrations were measured by IRMA (immunoradiometric assays) method in blood samples obtained at rest and 6-min intervals during exercise, and 15-min intervals during recovery period. Serum glucose levels were determined by standard enzymatic method glucose oxidase (GOD PAP) at the same intervals. There were no correlations between serum GH and glucose levels either during exercise or in the recovery period. There were no differences between glucose levels during exercise, so we can not exclude possible role of GH in glucose concentration maintenance. 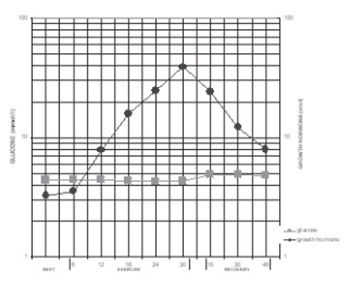