Anticoagulant therapy is most commonly assessed by measuring the effect of the drug on global clotting assay, such as APTT. It is known that response of the APTT to hepa-rin may be decreased in patients with high levels of factor VIII. In this work, we have attempted to determine in vitro conditions of experiment for obtaining relationship between different concentrations of heparin and values of APTT, and to investigate influence of factor VIII on correlation between concentrations of heparin and APTT. Measurement of the effect of heparin, added in vitro in normal coagulation control plasma (NCCP) showed that heparin in concentrations from 0,1 to 1,0 IU/mL prolonged APTT from 0,73 s to 99,26 s. Linearity of the relation of natural logaritm of APTT and concentration of added heparin in plasma for concentrations from 0,5 to 1,0 IU/mL (r = 0,995), and other characteristics of the validated method (RSD = 1,17%), made possible investigation of the influence of factor VIII addition in the solution. The addition of the Factor VIII concentrate, markedly influenced these APTT results. Increased factor VIII activity shortened the APTT, having more pronounced effect in the presence of the large amounts of heparin. Increased factor VIII was associated with downward shift in the concentration -logAPTT response curve (y = 24,644 x + 30,17 vs. y = 10,864 x + 27,256). This finding suggests the possibility for modeling of ex vivo establishment of correlation between plasma activity of FVIII and needed doses of heparin for appropriate management of heparin therapy 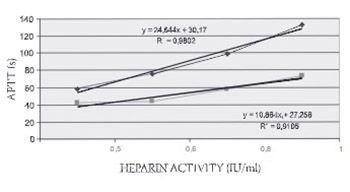