The Bcl-2 protein: a prognostic indicator strongly related to ER and PR in breast cancer

Bcl-2, the protein product of the Bcl-2 gene, is a member of the Bcl-2 family of proteins that play a crucial role in a complex mechanism of apoptosis. It was recently proposed that bcl-2 could inhibit cancer progression. In this study, we evaluated the expression patterns of Bcl-2, estrogen receptors (ER), progesterone receptors (PR) in 71 primary invasive breast carcinomas and their association with other clinicopathological parameters. Samples from 71 patients with invasive breast cancer with follow-up ranging from 4-103 months (median 57 months) were included in the study. Forty-six patients (66%) obtained a complete response, while 5 (9%) were considered non-responders during the follow up period of 103 months. Eighteen (25%) patients died, 15 (21%) from primary disease and 3 (4%) from other disease. In unvaried analysis, tumor size (<2 cm), lymph node (<4 lymph nodes), hormonal status and Bcl-2 expression are correlated with longer overall (OS) and relapse-free survival (RFS). Patients with 4 or more positive axillary lymph nodes had significantly shorter OS (p=0.01) and RFS (p=0.009). Higher expression of Bcl-2 was associated with longer OS (p=0.02) and RFS (p=0.03), and this result were independent of axillary lymph nodes and tumor size in Cox multivariate analysis. 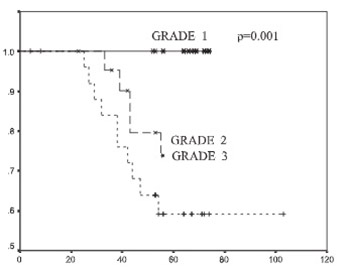