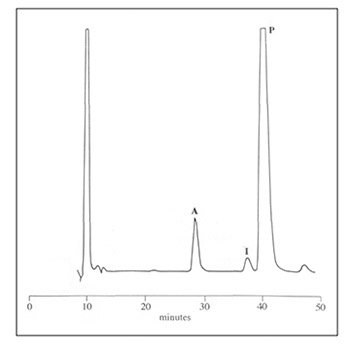 In testing the pre-sale procedure the marketing of drugs and their control in the last ten years, high perfomance liquid chromatography replaced numerous spectroscopic methods and gas chromatography in the quantitaive and qualitative analiysis. In the first period of HPLC application it was thought that it would become a complementary method of gas chromatography, however, today it has nearly completely replaced gas chromatography in pharmaceutical analysis. The application of the liquid mobile phase with the possibility of transformation of mobilized polarity during chromatography and all other modifications of mobile phase depending upon the characteristics of substance wich are being tested, is a great advantage in the process of separation in comparison to other methods.

The greater choice of stationary phase is the next factor wich enables realization of good separation. The separation line is connected to specific and sensitive detector systems, spectrafluorimeter, diode detector, electrochemical detector as other hyphernated systems HPLC-MS and HPLC-NMR, are the basic elements on which is based such wide and effective application of the HPLC method.

The purpose high perfomance liquid chromatography (HPLC) analysis of any drugs is to confirm the identity of a drug and provide quantitative results and also to monitor the progress of the therapy of a disease.1) Measuring presented on the Fig. 1. is chromatogram obtained for the plasma of depressed patients 12 h before oral administration of dexamethasone.

It may also be used to further our understanding of the normal and disease process in the human body trough biomedical and therapeutically research during investigation before of the drugs registration. The analyses of drugs and metabolites in biological fluids, particularly plasma, serum or urine is one of the most demanding but one of the most common uses of high performance of liquid chromatography. Blood, plasma or serum contains numerous endogenous compounds of ten present in concentrations much greater than those of analyte. Analiyte concentrations are often low, and in the case of drugs, the endogenous compounds are sometimes structurally very similar to the drug to be measured. The binding of drugs to the plasma protein also may occur which decreases the amount of free compound that is measured.

To undertake the analyses of drugs and metabolites in body fluids the analyst is facet with several problems. The first problem is due to the complex nature of the body fluid, the drugs must be isolated by an extraction technique, which ideally should provide a relatively clean extract, and the separation system must be capable of resolving the drugs of interest from co extractives. All mentioned when we are using high perfomance liquid chromatography require good selections of detectors, good stationary phase, eluents and adequate program during separation.

UV/VIS detector is the most versatile detector used in high perfomance liquid chromatography it is not always ideal since it is lack of specificity means high resolution of the analyte that may be required, UV detection is preferred since it offers excellent linearity and rapid quantitative analyses can be performed against a single standard of the drag being determined.

Diode array and rapid scanning detector are useful for peak idenjpgication and monitoring peak purity but they are somewhat less sensitive then single wavelength detectors. In liquid chromatography some components may have a poor uv chromophores if uv detection is being used or be completely retained on the liquid chro-matography column.

Fluorescence and electrochemical detector are not only considerably more sensitive towed appropriate analytes but also more selective than UV detectors for many compounds. If at all possible fluorescence detectors are sensitive, stable, selective and easy to operate. It is selectivity shows itself in the lack of frontal components observed in plasma extract whereas electrochemical detection is nearly always associated with a major frontal peak than tails considerably.

To date, the most sensitive method has been the reductive electrochemical detection and giving the excellent results in the investigation on some classes of drags. Several high perfomance liquid chromatography oxidative elee-trochemical methods have been developed for the analyses of drags and metabolites in body fluids. Mass spectrometer as specific detector with all variation of ionisation and interface (thermo spray, moving belt etc.) or liquid chromatography-tandem mass spectrometry2,3,4,5). NMR as selective and specific detector in high perfomance liquid chromatography today is also in used.

The development of a non-aqueous eluent for ionexchange separation on silica has provided an excellent system which, when used in conjugation with an electrochemical detector, permits the analyses of an extensive range of especially basic drags and metabolites.

New packing materials such as polymeric, base deactivated silica’s, pyrolysed carbon and the internal surface packing should offer the improved stability and higher efficiencies for certain classes of the compounds such as basic drags.

Microbore columns should become more accepted since they offer not only improved sensitivity but also a lower solvent consumption and consequently the reduced needs to dispose of noxious solvents.

In micelar liquid chromatography micelar mobile phases in reversed-phase instead of conventional hydro organic mobile phase is used. In micelar liquid chromatography complex electrostatic hydrophobic and steric interactions exist between the solute and both stationary and mobile phases. These enable the effective separation of samples of different nature. The main advantages of the use of a micelar solution in reversed-phase liquid chromatography are the solvent and the lower cost and toxicity, the biodegradability of the solvent and the easy dissolution of analytical samples, that enables the determination of drags in physiological fluids without the need for previous separation of the proteins present in the samples.

Using tetrabutylammonium phosphate as a competing base in the investigation of sulphonamides and heptanes sulfonate as ion pairing reagent. Ion pairing reagent is term used to describe enhaced retention as the result of the addition to the mobile phase of a large ion opposite charge to the molecular ions to be separated. For molecular cations alkyl sulphates or sulfonates are generaly utilised.

Often when compound exist in different isomeric forms it is a mixture of isomers. Alternatively there may be a need to monitor samples of one isomer to ensure it is purity. In both cases it is important to be able to separate isomers using liquid chromatography. This is especially important for drag substances, since isomers will almost certainly have different pharmacological and sometimes toxicological properties. Enantiomers are types of isomers that have aroused a great interest when the drastic teratogenic effects of the drag thalidomide (children born by mothers who had been taking thalidomide were born with truncated limbs) were attributed to one of the two enentiomers present in the drug substance. Enantiomers have identical physiochemical properties and therefore cannot be separated on conventional chromatography. Thus in the liquid chromatography separation of enantiomers it is necessary to use a “chiral selector”. This may take the form of a chiral derivation agent, a chiral mobile phase additive or a chiral stationary phase.

Typical common diastereomer formations the types of derivation reagents that may be used are shown of Fig. 2. The products formed are diastereoisomers. These compounds, which possess two “chiral centres”, have different physicochemical properties and are therefore separable by liquid chromatography on conventional “achiral” liquid chromatography columns.

Liquid chromatography techniques are very convenient for the study of the interactions between small molecules and large molecules, in particular to study drag-protein binding. Some investigator have used immobilised human serum albumin phase to study the interaction of drags such as benzodiazepines, warfarin, ibuprofen and others. The use of this phase as a model of interactions that take place in vivo may be taken a stage further. By adding a drag to the mobile phase it is possible to study how the interaction of one drug with human serum albumin is affected by the presence of another.

Liquid chromatography is also used extensively in drags dissolution studies carried out on pharmaceutical formulations to assess the likely availability of the drug substance form the formulation when it enters the stomach. The formulation is stirred and dissolution bath usually containing an aqueous buffer designed to mimic conditions in the stomach. The aqueous buffer is then sampled over a set time period and analysed for drag concentration.

It is also useful to follow the dissolution of excipientes since this may control the release of the drag substance. Liquid chromatography may be used for this purpose but such analysis is more difficult since the excipientes may have a weak chromophore and/or be polymeric. It goes without saying that the simultaneous determination of drug and excipient in the dissolution samples is more difficult still.

STABILITY STUDIES AS IMPORTANT PART IN QUALITY CONTROL OF DRUGS

The study of stability is not restricted to looking at degradation of the active. It is prudent to bear in mind that any degradation of a formulation excipient may lead to a change in the drug release characteristics of the formulation. For example lactose, a frequently used excipient, can undergo anomerisation in solution between its a and β forms.

Almost in all the laboratories for the quality control of drug the official methods for the assay of antibiotics are microbiological measurements. In order to provide it a separate laboratory for microbiological investigation has to be establishing with specialized staff (microbiologist). Nowa days high perfomance liquid chromatography technique is going to be used for the quantitative determination of antibiotics. That is a great advantage in the field on quality control of drugs.

Today in the Pharmacopoeias of USA, European, British and other high perfomance liquid chromatography is used instead of the chemical and meny instrumental methods for the control of drugs.

There are huge possibilities for further HPLC method development in several segments like creating new materials for preparing specific and more efficient stationary phases and related with that, discovering new combinations and modifications of mobile phases.

In scope of signal registration, new, more efficient hyphenated systems like HPLC-MS and HPLC-NMR are invented, as application of 1H NMR and 13C NMR technique as well, which are more and more improving day after day, and whose application will open huge possibilities and assistance in medical diagnostics and in tracking the destiny of healing substances in body liquids.