Body weight variations during toxicological testing can be one of the indicators of the test substance toxic effects. Data on food and water consumption are true indicators of the rate of growth of experimental animals (Stevens & Gallo, 1989). Daily recording of the food and water consumption was done during the acute toxicity testing of HEPALIP FORTE. The study was performed on Wistar rats. The active component of HEPALIP FORTE is EPL substance--essential phospholipids, a natural substance present in every living cell. Essential phospholipids in combination with vitamins have been used in the treatment of liver diseases, dyslipoproteinaemias and intoxications accompanied with liver failure. Statistical analysis of the body weight variations was performed separately, for males and females. The analysis failed to show any significant difference between the groups. There was a significant difference in water consumption between the male group 2M and female groups 3F and 2F in comparison with control groups. Statistical analysis of the variations of food consumption showed a significant difference in all male groups in comparison with control groups, and only in the 3F female group in comparison with a control group. Considering the absence of lethality and the lack of significant influence of the test substance on animal body weights, we concluded that the test substance was not acutely toxic in rats, if applied orally, in single doses of 300 mg/kg, 500 mg/kg and 1000 mg/kg. Significant differences found in food and water consumption suggest a need of their during the future chronic toxicity testing. 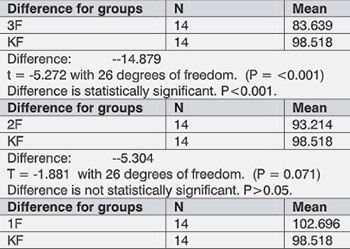