Clomipramine and fluoxetine effects in the treatment of panic disorder

Panic disorder (PD) is an acute psychobiologic reaction manifested by intense anxiety and panic attacks, that occur unpredictably with subjective sense of intense apprehension or terror, accompanied by temporary loss of the ability to plan, think, or reason and the intense desire to escape or flee the situation. Panic attacks may last from a few seconds to an hour or longer, Symptoms typically include, among others, palpitations, tachycardia, hypertension, chest pain, dyspnoea, and fear of loosing control or going crazy and vague feeling of imminent doom or death. Since pharmacotherapy of PD includes the administration of selective serotonin reuptake inhibitors and tricyclic antidepressants, the objective of this study was to perform a pilot double blind clinical trial designed to compare the effects of two studied drugs in the treatment of PD.

A total number of 40 patients with a history of panic disorder were randomly assigned into two groups of 20 patients each. Hamilton anxiety rating scale and Standard Psychiatric Interview were methods for PD assessment. One group was treated with clomipramine hydrochloride (ANAFRANIL®) 75 mg/day and the other with fluoxetine (OXETIN®) 60 mg/day. Both drugs were administrated by mouth (PO) two times-a-day in equally divided doses for 6 weeks.

Both studied agents produced similar antipanic effectiveness. Favourable response was achieved in 95% of patients treated with fluoxetine and 90% of patients treated with clomipramine. The onset of antipanic effects was quicker in all clomipramine treated patients, while fluox-etine produced more-favourable response in male patients. The duration of treatment with both antidepres-sants studied should be at least 10 weeks, instead of 6 weeks. 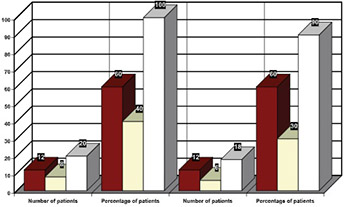