Posttraumatic stress disorder (PTSD) is a psychiatric disorder characterised by an acute emotional response to a traumatic event or situation involving severe environmental stress (natural disasters, wars, epidemics, rape, assaults, physical torture, catastrophic illness or accident), which may be identified in cognitive, affective or sensory motor activities. The objective was to perform a pilot clinical trial designed to compare the effects of older (tricyclic) and newer “second-generation” (selective inhibitors of serotonin uptake) antidepressants in the treatment of PTSD. A total of 20 hospitalised chronic military combat Bosnian veterans with PTSD symptoms were randomly assigned into two groups of 10 patients each. One group was treated with amitriptyline hydrochloride (AMYZOL®) 75 mg/day as a representative of older antidepressants and the other with fluoxetine hydrochloride 60 mg/day (OXETIN®) as a representative of newer antidepressants. Those drugs were administered by mouth two or three times-a-day in equally divided doses for at least 8 weeks. Favourable response was achieved in 70% of patients treated with amitriptyline hydrochloride and 60% of patients treated with fluoxetine hydrochloride. Amitriptyline hydrochloride was more effective in the treatment of acute PTSD symptoms (emotional numbing, startle reaction, nightmares, flashbacks, intrusive thoughts, vulnerability, poor impulse control or irritability and explosiveness). Fluoxetine hydrochloride showed a greater efficacy in the treatment of chronic PTSD symptoms (avoidance and numbing symptoms, hyperarousal, nightmares and a feeling of guilt). 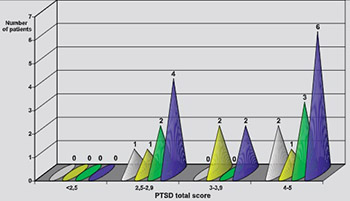