The new trends in theophylline therapy

Sustained-release theophylline pellets formulation for once-daily evening administration significantly improved patients compliance and adjusted serum levels profile of the drug. The patients conversion from i.v. to p.o. therapy is one of the most critical steps in the treatment of asthma according to its chronopathophysiological character. In our study we have examined safety and efficiency of this conversion in twelve hospitalised asthmatic patients who were given the new sustained-release theophylline pellets formulation for once-daily evening administration. The lung function parameters (FEV1, VC, RV, and Rt) and serum theophylline concentrations were monitored. So, the values obtained for the last day of i.v. therapy and the fifth day of p.o. therapy were compared. We found that 75% of the patients had no change or improved lung function on the conversion. Our results indicate that this conversion from i.v. to p.o. theophylline therapy is safe and could be efficacious. Also, the maximum theophylline serum levels could safely be predicted by measuring only one serum concentration in p.o. therapy with sustained-release theophylline pellets formulation for once-daily evening administration. 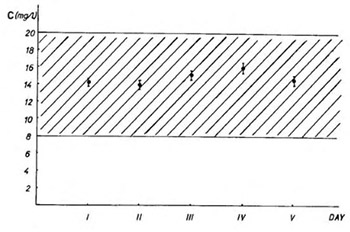 Asthma is a chronic inflammatory disease of the airways, characterised by hyper-responsiveness to a variety of stimuli (1). Clinically, these features are manifested by attacks of cough, wheezing, and dyspnoea. The nocturnal worsening of asthma is a common event in asthma patients. It has been recognized since the 5th century A.D. by Aurelianus Caelius (2). Nocturnal asthma, defined as an exacerbation of asthma at night, is associated with increases in symptoms and need for medication, increased airway responsiveness and worsening of lung function (3).

In the long term treatment, especially in patients with nocturnal asthma, theophylline has a major impact on lung function parameters. This observation corresponds well to the hypothesis of a predominantly antinlammato-tory action of theophylline (5). Theophylline is not only a bronchodilator but also has other effects (inhibition of mediator release, enhancement of mucociliary clearance, enhancement of diaphragmatic contractility) that are potentially beneficial to asthmatic patients. An important feature of oral controlled-release theophylline therapy is timing of drug administration. Because airway reactivity increases and airway caliber decreases at night, it has been suggested that the greatest benefit is derived from theophylline when peak serum concentration is reached during the night or the early morning.

It has been confirmed that once-daily theophylline (Th) regimens are as effective as twice daily regimens for control of chronic asthma in adult patients (6,7,8).

In the studies where the once-daily theophylline formulation was administered in the evening, there were significant benefits in spirometric values and symptom control in favour to the once-daily regimen (8,9,10). This confirmed the dynamic nature of the asthma process, in other words that the patients’ greatest physiological needs for bronchodilatation are between 2 and 8 a.m. In order to achieve effective theophylline serum concentrations (STCns) within the range of 8-20 mg/l once-daily dosing requires single doses greater than 600 mg of theo-phylline, which presumes linear and pH independent drug release from a dosage form.

In order to individualize theophylline dosage, estimation of minimum and maximum STCns is essential. Whereas the minimum (trough) concentration can readily be estimated from the pre-dose level for sustained-release theo-phylline pellets formulation, the nocturnal maximum concentration can be predicted by taking one blood sample between 7 and 9 a.m. The resultant STCns represent 90% of the maximum STCns, with a range of 80 to 100% in individual subjects.

The safe clinical conversion from i.v. amonophylline to this sustained-release theophylline pellets formulation for once-daily evening administration could have multiple advantages for the patients, providing most suitable conditions for the chronical treatment, and was examined in this study.

Twelve hospitalised asthmatic patients (reversibility of the obstruction was proven by a beta-agonist inhalation) participated in the study. Mean patient’s age 49,614,7 years (range 24-73 years), mean body mass was 76,713,8 kg (range 50-107 kg), eight were nonsmokers (six female and two male), and four smokers (one female and three male). Before the conversion, all the patients received i.v. amonophylline (250 or 500 mg twice daily). Inhaled beta-agonists and inhalled or orally administrated steroids (part of some patient’s regular therapy) were continued throughout the trial. The patients were asked to keep their daily dosage of these medications constant, and it was supervised.

Drugs known to affect theophylline metabolism were not allowed during the trial.

The patients took their regular meals three times daily, additional food intake was not restricted (except xanthine containing foods and beverages), and was recorded; so was the occurrence of possible side-effects. One the conversion, the patients were administrated (at 8 p.m., one hour after a meal) one or two capsules (each containing 375mg of anhydrous theophylline) of a sustained-release theophylline pellets formulation for once-daily evening administration (average dose of 8,642,17 mg, range 4,66 to 11,36 mg). Fixed dose of the preparation all the patients received for five subsequent days. Blood samples for the STCns determination were taken according to the following shedule:

Five mililiters of blood were taken, serum was separated, and frozen at —20°C until analysed.

Theophylline in serum was determinated by the spectro-densitometric method (11)

The function parameters (spiropletismography was used) were monitored for six days betwwen 8 and 9 a.m. For the presentation of the results and the conversion safety assesment, we chose the lung function parameters (FEV1-forced expiratory volume in the first second, VC-vital capacity, RV-residual volume and RT-total resistance) for the last day of i.v. aminophylline, and the fifth day of p.o. sustained release theophylline pellets for once —daily evening administration.

The main results are shown in tables, I, II and III, and in Figure 1.trations (STCns) after i.v. aminophylline and p.o. sustained-release theophylline pellets formulation for once-daily evening administration, determined for twelve asthmatic patients

Table I contains minimum STCns after i.v. amino-phylline, as well as after four p.o. doses of sustained-release theophylline pellets formulation. It can been seen that in the case of non-smoking patients the trough concentration rose, confirming the sustained-release properties of the formulation, while in the case of smoking patients indicated the need for the adjustment of the dosage and timing of the administration (increase the dose and administer one third in the morning)

During the study all the conditions were constant, so the clinician, on the basis of the lung function comparison, could draw a conclusion about possible change during the conversion (Table II). It can be seen that 75% of the patients had no change or improved lung function on the conversion.

In Figure 1., non-smoking patients’ 8 a.m. STCns are given for the five trial days. It is shown that all the concentrations were within therapeutic range of theophylline (mean 14.83 ± 0.86).

The results obtained indicate that this conversion from i.v. to p.o. theophylline therapy is safe and could be efficacious, and that maximum STCns could be predicted by measuring 8 a.m. steady state concentration

However, comparing individual STCns with lung function parameters, one of the mayor conclusions in theo-phylline therapy arose.

This is that each patient must be treated individually in a context of SCTns, lung function parameters and his specific needs for theophylline in the therapy of asthma.