In vitro antiproliferative effects of SarCNU and GMI ganglioside were tested in different concentration ratios in C6 glioma cell culture. Based on MTT assay and a protein assay, cytotoxicity of each agent separately and the two agents combined was tested. When the cells were treated with different concentrations of ganglioside ranging from 10-’ to 10-2, the number of viable cells decreased highly on days two and seven, regardless of the concentration of the agent applied. SarCNU, as expected, has caused antiproliferative effects which highly correlated with the concentration of the agent tested. When the C6 glioma cell culture was treated with the two agents combined in the optimal concentration causing the above mentioned cytotoxicity, effects observed did not correlate with those observed for each agent alone, suggesting in this case the expression of highly neuroprotective effects of ganglioside GMI. 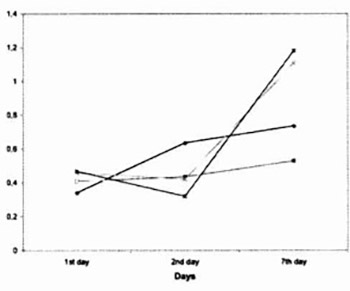 Gliomas which represent the most, common form of intrinsic brain tumor are characterized by diffuse local invasion centimeters beyond the macroscopic tumor of normal brain structures irrespective of their histological grade of malignancy(Merzak et al 1995). This feature seems to be a major obstacle to successful therapy. They generaly infiltrate CNS as individual tumor cells several margin below and often recur after subtotal surgical resection. So far, factors involved in their proliferation and invasiveness are very poorly documented. Pilkingston et al 1992 have recognize genetic heterogeneity in human gliomas. At that time it was proposed that this heterogeneity is very important in growth and main-tainance of the tumor an it may be related to the activity of growth factors and gangliosides. It was assumed that these molecules might influence malignant progression and invasive potential ant therefore also the diagnosis of gliomas. The effects of gangliosides on the growth of glioma cell cultures as well as human cell lines have been studied recently.(Yates et a I., 1995., Takeshima et al 1992., Saqr et al 1995.,). These molecules are present at the cell surface of all mammalian cells, tumor glioma cells included. Three types of glycosphingolipid component profiles have been established for human intracranial gliomas so far. (Takeshima et al 1992). GD3,GM3 and GMI are major gangliosides described in N-370 FG cells derived from a culture of transformed human fetal glial celts.(Ariga et al 1996). Bauer et al 1994 suggested the validity of tumor ganglioside analysis for the character]-zation and diagnosis of gliomas. Gangliosides generally exert a proliferation inhibitory effect on fetal brain cells and glioma cell lines in vitro and play an important role in promoting glioma cell motility and invasiveness. Merzak et ai.,1994, Merzak et al.,1995 and Kochekpour et al., 1995 have shown that cell surface gangliosides are positively involved in glioma cell adhesion. Migration and invasion in vitro. Exogenously given gangliosides were found to prevent cell adhesion when they were incubated with cells during invasion assay (Merzak et al 1996) and they also affect the growth of cultured glioma U-1242 MG cells. They do so through inhibition of activities of several kinases including protein kinase C*PKc and CAMP kinase (Yates et al 1995). It see s that they are involved in coordination of activities of several trophic factors simultaneously acting on a cell by regulating the dimerization of their respective receptor monomers (Yates et al 1995). Some representatives of gangliosides such as GD3 are implicated in angiogenesis of tumor (Koochekpouret al 1995), GMI has been known to cause inhibition of PDGF stimulated and serum stimulated DNA synthesis in Swiss 3T3 cells and the human glioma cell line U-1242 MG in a dose dependant manner, to cause stimulation of DNA synthesis in quiescent U-1242 MG cells in both sparse and confluent conditions. It has been shown that exogenously added gangliosides can have the opposite bimodal effects on progression of human glioma cells through the cell cycle depending upon the growth phase of the celis. (Saqr et al. 1995). The effects of gangliosides applied in combination with SarCNU chemotherapeutic agent which causes in general growth inhibition for C6 glioma cell line have not been tested so far. There is a great potential of interaction between these two agents concerning the role ascribed to each one of them. Therefore, it was of general interest to test expected cytotoxicity of these two agents combined, all in relation to possible improvements in therapy of malignant gliomas.

MTT agent was kindly provided by Dr.R.Mandeville of The Institute Armand Frappier, University of Quebec. Gangtioside GM1 and SarCNLl were purchased from Sigma chemicals.

The cells in suspension culture from ATTC were pelleted at 300g forl5minutes, resuspended in 10 mL of culture medium and plated in a flask. Before its use the original cell culture suspension was thawed and diluted with the recommended culture medium(Ham-s F10, 82.5%., horse serum, 15%, fetal bovine serum, 2.5%). The donor C6 cells were 40th passage C6 glioma/astrocytoma cells obtained as a cell culture. This cell line is derived from Ν methylnitrosourea transformed rat astrocytes. The culture flasks were incubated at 37 degrees in a water saturated 6% C02.

Procedure with the cells

1×10 4 cells were cultured in the presence and absence of ganglioside GMI. The concentrations tested were: 0.1 mg/ml.,0.01 mg/mL and 0.001 mg/mL Cells were harvested from exponential phase maintenance cultures (T 75), counted by Trypan Blue exclusion and dispensed within replicate 96 well culture plates in a 100 mL volumes using multichannel pipet. After 24 hours incubation at 37degrees, 100 mL of culture medium, culture medium containing drug vehicle or culture medium containing drug administered in appropriate well (each group has 6 to7 samples) was added to the weels. Peripheral weels were used as drug blanks (n*2) and medium tetrazolium agent was used for background determinations. Culture plates were then incubated from 1,2 and 7 days. Number of treated cells prior to addition of tetrazolium reagent was 1 × 104 cells. In each phase oi growth (1,2,7 days*), MTT growth assay was performed according to Mosmann et al 1983. In this test the viable cell count is directly proportional to to the production ot farmazan which following stabilization can be measured spectrophotometricaly. The number of cells after 1,2,7 days of growth was determined by standard cell counting. The same procedure was applied when testing different concentrations of SarCNU. These concentrations ranged from 10 ng/mL to 104 ng/mL. When the effects of the combined treatment were examined, the concentration of SarCNU that seemed to be least effective in inhibiting cell line growth was tested in combination with different concentrations of ganglioside ranging from 10-1 to 10-3 g/mL. All the agents tested were dissolved in sterile culture medium.

This stock was prepared as follows: 5 mg MTT dissolved in ImL PBS sterile. The solution was filtered with 0.45 mm filter units and stored at +4 for a maximum of Imonth. MTT working solution was prepared just prior to culture application by diluting MTT stock (1:5) in a prewarmed standard culture medium. Under standard conditions,50 mL of MTT working solution was added to each culture weel (50 mg MTT per 250 mL total medium volume. Cultures were then incubated at 37 degrees for the period of 24 hours. After this period all but 10,20 mL of culture media was removed from weels by slow aspiration and replaced with 150 mL DMSO using multichannel pipet. After formazan solu-bilization(vibration on a plate shaker), the absorbance of each weel was measured using microculture plate reader at 540 nm. Cell line growth and growth inhibition were expressed as mean +SD absorbance units, following substraction of mean background absorbance. Linearity and reproducibility of instrumental measurements were verified through the use of farmazan reagents in appropriate solvent systems.

Analysis of the results: Statistical analysis was performed by two tailed Students T test for the comparison of the mean values on a particular day of treatment with the control group.

The effects of ganglioside treatment are presented in table 1

C6 cell culture was treated with four different concentrations of SarCNU. Under normal conditions, the specific activity of MTT increased twice from day one to day two at the time when the cells were proliferating rapidly. The same however does not hold for day seven. When C6 glioma cells were treated with different concentrations of SarCNU, highty significant reduction in farmezan production was observed in all phases of cell growth. However the observed effects were highly dependent on the concentration of the agent applied. Namely, the highest concentration of SarCNU produced the highest cytotoxicity. Supression of growth was achieved on the first day and after that the number of viable cells either decreased or remained at the same level.

The effects of combined SarCNU and ganglioside treatment are presented in graph 1:

Upon analysis of the data one can see that SarCNU applied in the concentration of 10 ng/mL causes inhibition of farmezan production and decreases cell viability. However upon the addition of different concentrations of GMI, the initial decrease in farmezan production is not further potentiated but instead is kept at the level caused by SarCNU treatment. Essentialy, no growth changes are observed. Upon the treatment of celts with GMI suggesting that in this case the agent does not behave as antiproliferative agent.

Major advances in cell culture techniques. Immunology and molecular biology during last ten years have led to significant progress in understanding the process of normal glial differentiation. In fact, understanding of the normai glial differentiation has a potentially far reaching implications for developing new forms of treatment for patients with glial neoplasms.(Linskey M, E et al 1995).

In this report in vitro antiproliferative effects of SarCNU chemotherapeutic agent (antitumor drug) and ganglioside GMI were tested on C6 glioma cells in the phase of cell rapid proliferation. The obtained results are based on MTT (3-(4,5-dimethyl thiazol 2-yl)-2,5 difenil tetrazolium bromide) colorimetric assay:’ This agent so far has been reported to act as hydrogen acceptor and agent frequently used for the estimation of cell viability. Namely, only viable cells reduce tetrazolium salts to colored farmezan derivatives which can be quantitated spectrophotometri-cally. This is also the first report that examins the effects of combined treatment of the two agents, namely SarCNU concentration that proved to be least effective and different concentrations of ganglioside GMI. When C6 glioma cells were treated with ganglioside GMI, the number of viable cells decreased significantly on days two and seven with each concentration tested. This agrees well with the results reported by Merzak et al 1994, Merzak et al 1995 and Koochekpour et al 1995 who have demonstrated proliferation inhibitory effects for this agent.

When SarCNU was tested as an agent, its cytotoxicity was demonstrated easily and the level of cytotoxicity increased with increase in the concentration of the agent. SarCNU, a derivative of sarcosinamide synthesized by Suami et al 1982 is as arcosinamide congener of BCNU. So far it has been shown to have great potential as an antitumor drug and is more cytotoxic than BCNU in assays using human glioma ceils (Houchens et al 1989). The increased cyto-toxicity of this drug is being explained by the mediation of the uptake of the agent by nonfaciiitated and facilitated diffusion via catecholamine uptake 2 carrier system (Noe et al 1993). When the two agents were combined and applied simultaneously it has been shown that major growth inhibition(decrease in farmezan production) is observed with SarCNU alone, while the combined treat-ment, except in day two for GMI(l0-3g/L)did not cause any major changes in farmezan production. The obtained results seem to agree well with the results reported by Saqr et al 1995 who has shown that egogenously added gangliosides have opposite bimodal effects on progression of human glioma cells through ceil cycle depending on the growth phase of cells tested. It seems that ganglioside in this case exibits neuroprotective effects. Results seem to suggest that combination of SarCNU and ganglioside treatment does not provoke highly expressed antiproliferative effects as expected but instead neuroprotective effectŝ of GMI prevail. Further investigations should be carried out in order to obtain better understanding of the changes observed in C6 gliom cell line, namely different concentrations of SarCNU in combination with different GMI concentrations should be tested and eventual cytotoxicity of the two agents determined. in this way, the biological agressiveness of these tumors can be assesssed and proper combination of the agents that can cause the cell death found.