This study explored arterial vascularisation of celiac trunk and superior mesenteric artery using method of selective arteriography in series of arteriogram which were done in 39 patients of Institute for Radiology. There were no pathological findings in a single case at pancreas or duodenum. Arteries which arise for vascularization of pancreas had a common spot of arising, flow and ramification. Pancreatic duodenal arteries arcade, which supply blood to the duodenum and the body of the pancreas, were shown in arteriogram. The branches which provide blood supply to the body and the tail of the pancreas were found. There was one case where lower pancreatic artery arose from gastroduodenal artery and in one case a direct anastomosis for celiac trunk and superior mesenteric arteries, better known as Tandler’s anastomosis. 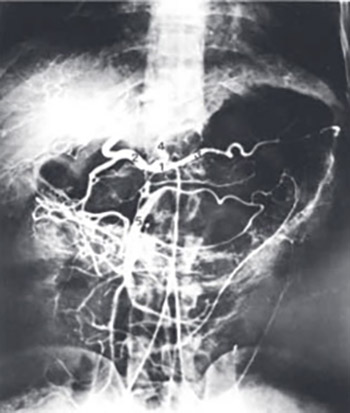 Published
2010-02-20
How to Cite
1.
Kulenović A, Sarač-Hadžihalilović A. Investigation of Vascularization of Human Pancreas Using Method of Selective Arteriography with Insight Into Significance to a Surgical Approach for this Organ. Bosn J of Basic Med Sci [Internet]. 2010Feb.20 [cited 2022Jan.20];10(1):15-8. Available from: https://www.bjbms.org/ojs/index.php/bjbms/article/view/2727
Download Citation
Issue
Vol. 10 No. 1 (2010)
Section
Anatomy