HeadHER1/EGFR is known to play a pivotal role in tumorigenesis and is overexpressed in up to 80% of NSCLCs. The study of an Expanded Access Clinical Program of Erlotinib in NSCLC is a phase IV openlabel, non-randomized, multicenter trial in patients with advanced (inoperable stage IIIb/IV) NSCLC who were eligible for treatment with erlotinib but had no access to trial participation. Patients for the study from Bosnia and Herzegovina (B&H) were selected from two Clinical centres (Sarajevo and Banja Luka). The aim of study was to evaluated efficacy and tolerability of erlotinib monotherapy in this setting. All patients who received at least one dose of erlotinib and data were entered in the database as of the CRF cut-off date of 14th May 2008 were included in analysis of data (n = 19). This population is defined as the Intent to Treat (ITT) population and includes all patients who had at least one dose of erlotinib regardless of whether major protocol violations were incurred. The findings are consistent with the results of the randomized, placebo-controlled BR.21 study. Indicating that erlotinib is an effective option for patients with advanced NSCLC who are unsuitable for, or who have previously failed standard chemotherapy. In B&H group of patients DCR was almost 84%, and PFS was approximately 24,7 weeks (compared with 44% and 9,7 weeks for erlotinib reported in phase III). Almost three quarter of the patients received erlotinib as their second line of therapy. Overall, erlotinib was well tolerated; there were no patients who withdrew due to a treatment-related AE (mainly rash) and there were few dose reductions. 24% of patients experienced an SAE (most commonly gastrointestinal (GI) disorders). 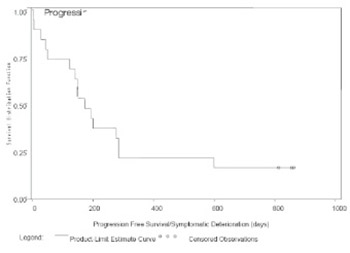