Pectoral major flap is one of most frequently used flaps in head and neck reconstruction. The wide attractiveness of this flap is based on secure vascular stalk made from pectoral branch of thoracoacromial artery. The aim of study was to analyze the variations in vascular supply of pectoral major muscle. The investigation was performed on 30 fetuses from 20 to 36 gestation week both gender. For determining vascular network the samples injected with barium sulphate were subjected to Spalteholtz technique, and on 30 fresh cadavers where and we performed injection of Metilen blue 1% in pectoral branch of thoracoacromial artery. In 87% we found one pectoral branch and in 13 % two branches for pectoral muscle were found. Before entering the muscle, pectoral branch is dividing in two terminal branches (67%). In all cases lateral part of pectoral muscle is supplied by branch of lateral thoracic artery. The average area of dyed skin was 13 x 20 cm in region between III and VI rib and from parasternal line to anterior axillar line. The average distance of most distal part of dyed skin to midclavicular point was 24 cm. The pectoral branch of thoracoactomial artery obtains main blood supply for pectoral major muscle mass and despite of anatomical variations can be defined as main pedicle for musculocutaneous flap. Dyed skin confirms that pectoral major flap has defined skin territory sufficient for reconstructions in head and neck area. 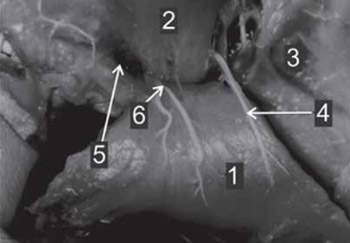