The objective of this article is to review results of one surgical team for gastric pull-up reconstruction for carcinoma of the hypopharynx and cervical esophagus after pharyngolaryngo-esophagectomy in small thoracic unit.

Between July, 2004 and December 2005, four patients underwent pharyngolaryngo-esophagectomy and gastric pull-up reconstruction for carcinoma of hypopharynx and esophagus. There were three female and one male patient with average age at the time of surgery 47 years. The study analyzed complications and mortality in early postoperative period after resections of the carcinoma.

Squamous cell cancer in all patients was confirmed. There was no in-hospital mortality and non-fatal complications were occurred in 3 patients. It was recorded two year survival for two patients.

Pharyngolaryngo-esophagectomy and gastric pull-up reconstruction can be performed for the patients with carcinoma of the hypopharynx and cervical esophagus with an acceptable operative mortality and morbidity rate even in small thoracic unit. Long term survival despite good early postoperative results still remains poor. 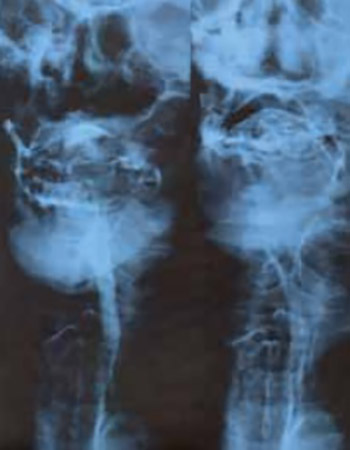