Brucellosis is primarily an animal disease, and in them it passes as an asymptomatic chronic infection. In humans, brucellosis can be acute, sub-acute and/or chronic disease, but its geographical distribution follows the pattern found in animals. After the last war, the first Brucella cases in Bosnia and Herzegovina were reported in 2000, in returnees, owners of donated livestock. The objective of this paper was to address an increased public health problem regarding brucellosis in Bosnia and Herzegovina and to initiate better cooperation among epidemiologists, veterinarians, microbiologists and infectologists and responsible authorities toward elimination and eradication of this severe disease. Retrospective analysis of Brucella case histories and treatment protocols of all the cases hospitalized in Clinic for Infectious Diseases, University of Sarajevo Clinics Center (CCUS) was conducted. All the patients hospitalized between 1 January 2000 and 1 July 2005 were included. The diagnoses were confirmed by laboratory tests, chemo culture or serologically. The Rose Bengal agglutination and ELISA tests were used as laboratory confirmation methods. The number of hospitalized cases over the last 5 years was compared with total number of reported cases in the first 6 months of 2005. The results of this study showed that Brucella infections in humans, compared to other zoonoses, was represented with 11.8%. Brucellosis was the second zoonose in a ranking of zoonotic diseases cases with steady increase in the number of reported cases each year. The number of cases treated in the first 6 months of 2005 already exceeded half of the total number of cases treated in the last 5 years. Human brucellosis is an increasing public health problem in Bosnia and Herzegovina, and it reflects spreading of the same disease in animals. The applied prevention measures have been insufficient, so it is necessary to mobilize all the available resources of human and veterinary medicine, as well as the authorities, microbiological laboratory diagnostics in order to identify foci of epidemics and to try to eliminate and eradicate this complicated disease. 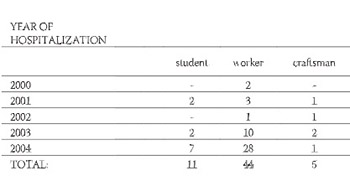