Hyperbaric Oxygenation as a Possible Therapy of Choice for Infertility Treatment

Endometrial sonographic and color doppler features can be used to predict the occurrence of pregnancy in natural or stimulated cycles. Implantation will usually only take place if the endometrium has reach a certain stage of vascularisation and development. The aim of this study was to evaluate endometrial development -- endometrial thickness and reflectivity , subendometrial, endometrial and uterine perfusion, after hyperbaric oxygenation, using transvaginal color doppler. During a three years period 32 women with unexplained infertility were entered into a randomised study. The patients were treated in multiplaced HAUX chamber at pressure of 2.3 ATA during 70 minutes, 7 days consecutively beginning with day 5th of menstrual cycle. The evaluation of effects of hyperbaric oxygen therapy was carried out by transvaginal color doppler sonography which was continuously used starting from 8th day of menstrual cycle until the ovulation in the cycles when the therapy was applied , one month before and one month after the therapy. Folliculometry in the cycles when hyperbaric oxygen therapy at 2.3 ATA was applied, indicated an excellent response of endometrium. Thickness of endometrium at the time of ovulation was 11.0 +/- 2.6 mm. Desirable quality of endometrium was significantly better in the cycle when HBO therapy had been applied (p< 0.001). The doppler flowmetry of the uterine arteries indicated that the uterine blood vessel resistance was slightly higher than expected. Mapping of subendometrial blood vessels in the cycles covered by hyperbaric oxygen therapy showed the intensive capillary network of endometrium with low resistance Ri< 0.45. The oxygen used under higher pressure -- oxygen as a drug , may have an extraordinary significance for better outcome of pregnancy implantation by improving endometrial receptivity. If endometrial receptivity is conditioned by adequate vascularisation and oxygenation, then hyperbaric oxygen therapy is the treatment of choice. 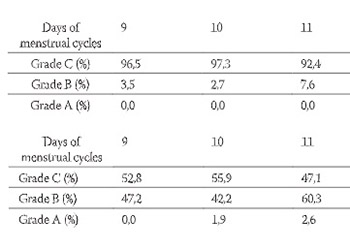