Expression of p53, bcl-2, and ki-67 Proteins in the Inﬂammatory Regenerative and Dysplastic Epithelial Lesions of Flat Colonic Mucosa

The aim of the study was to define the distribution of p53, bcl-2 and Ki-67 proteins in the inflammatory-regenerative and dysplastic lesionsof the colon mucosa. The relationship between the presentation of p53, bcl-2 and Ki-67 proteins and the intensity of the inflammatory-regenerative and dysplastic lesions in the colon flat mucosa was investigated as well. Biopsy specimens from 270 patients were examined: 74 were classified as inflammatory-regenerative and 196 as dysplastic lesions (108 mild, 58 moderate, and 30 severe dysplasia). The expression of all three proteins was assessed on the basis of location, quantity, and intensity of immunostaining, by counting antigen positive cells, in comparison with normal mucosa and adenocarcinoma. p53 protein appears only in sporadic cases (6.6%) of severe dysplasia. Bcl-2 expression appears significantly (p<0.005) more often in cases of mild dysplasia (61.1%) compared to inflammatory-regenerative mucosa (14.8%). In cases of mild dysplasia, bcl-2 positive cells were spreading from the lower third to the middle third of the crypts. Bcl-2 expression was maintained through the stadiums of moderate and severe dysplasia (75.8%), where antigen positive cells were found all along the crypts. A significant increase (p<0.005) in the expression of nuclear protein Ki-67 was noticed in the stadiums of moderate (labelling index =26.3) compared to mild dysplasia (labelling index=16.7), and severe (labelling index=36.7) compared to moderate dysplasia, where the zone of cellular proliferation was widen along the whole crypt length. In the process of the development of epithelial dysplasia in the flat mucosa of colon a degree of the gene p53 alteration is low and appears only in sporadic cases of severe dysplasia. Mutation of the bcl-2 gene is involved in the genesis of the lesion but not in its progression to carcinoma. Increased expressionof Ki-67 protein speaks in favour of an increased cellular proliferation which, together with the above mentioned mechanisms, is involved in the process of occurrence and progression of epithelial dysplasia in the flat mucosa of colon. 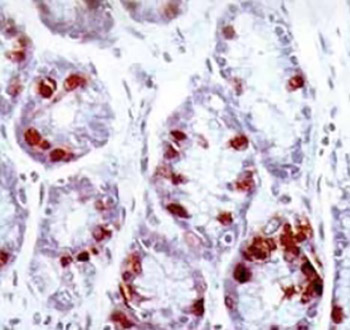