Perforation of gastric cancer - What should the surgeon do?

Perforation represents a rare and severe complication of gastric cancer (GC) with a large hospital mortality (8-82%). The aim of this study is to evaluate the clinical-pathological features in patients with perforated gastric cancer (PGC) and to advise the surgical treatment options. A total of 11 patients with PGC were retrospectively reviewed among 376 consecutive cases of GC operated. The clinical-pathological features including tumor stage, survival, and the type of treatment were observed. The perforation was more frequent in stage III (8 patients) and in stage IV (3 patients), but none of the cases in stage I and II GC were observed. All the patients had serosal invasion and lymph node metastasis. Limited lymphadenectomy (D0, D1) was performed in 5 patients, and extended lymphadenectomy (D2, D3) in 3 patients. Emergency gastrectomy was performed in 8 (72.8%) patients, subtotal gastrectomy in 5 (45.5%), and total gastrectomy in 3 (27.2%) cases. Three (27.2%) patients were treated by simple closure with omental patch. The overall 30-day mortality rate was 46%. The survival rate was higher among the patients who underwent curative resection (75.77±68.88 days) than in those who underwent simple closure with omental patch (18.00±24.43 days). The difference between the treatments in these groups was significant (p < 0.05). PGC required surgical emergency. Curative resection improved long-term survival in the patients with potentially curable gastric malignancy. Unsuccessful outcomes after PGC could be attributed to the poor condition of the patients and the advanced disease stage. 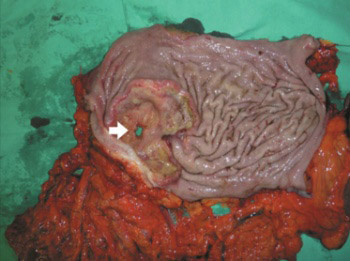 Despite the fact that the incidence of gastric cancer (GC) has been declining [1], GC is the most frequent cause of gastrointestinal cancer and the second biggest cause of cancer-related mortality worldwide [2]. On the other hand, the spontaneous perforation of gastric cancer (PGC) is a rare complication with fatal outcomes [1], which occurs in 0.56 to 3.9% of all cases of GC [3], with high rate of hospital mortality (8-82%) [1]. According to the literature, gastric ulcers, have been the main cause of gastric perforation (GP) [4], and about 10-16% of the cases are caused by GC [1,4]. Moreover, PGC accounts for less than 1% of the incidence of acute abdomen, and usually has poor outcomes [5]. It is difficult to preoperatively diagnose PGC, because its preoperative symptoms are the same as those of a perforated gastric ulcer [4]. Only one-third of all the PGC cases are diagnosed preoperatively, and the diagnosis of GC is usually made only during the postoperative pathologic examination [6]. It is still under debate which surgical management of PGC should be accepted as a standard; meanwhile, the extent of malignancy and the degree of peritonitis are relied upon in deciding on the adequate surgical approach.

Surgical management of PGC can be performed by employing the one-stage or two-stage technique [7]. The first procedure treats life-threatening peritonitis, followed by the second procedure which includes definitive gastrectomy with appropriate lymph node dissection [4,6]. Unfortunately, PGC usually results in a poor outcome, and long- term survival seems to be rare. It is clinically characterized by general peritonitis and frequently occurs at the advanced stage of the disease [8].

The aim of the present study is to evaluate the clinical-pathological features in patients with PGC and to advise the surgical treatment options.

In this retrospective cohort study of PGC, we evaluated all 376 patients presented to the Clinic for Surgery of the Clinical Center Nis, Serbia with GC, from 2007 to 2014, who underwent exploratory laparotomies. Among the 376 patients, 11 patients had perforated GC.

The clinical-pathological features of all the patients were analyzed based on their medical records. Age, sex, preoperative diagnosis, surgical procedure, location of perforation, depth of gastric wall invasion, presence of lymph node metastasis, presence of distant metastases (liver metastases or intraperitoneal secondary deposits), type of surgery, degree of lymph node dissection, complication, and outcomes of the patients were examined. In 2 patients, the preoperative histopathologic diagnosis of GC was determined by fiber-optical gastroscopy and biopsy. In 9 patients, the intraoperatively determined diagnosis of malignity upon the surgeon’s subjective experience was confirmed by histopathological verification of the perforation place biopsy, or with a resected specimen of stomach by a pathologist. The histopathological diagnosis of intestinal or diffuse GC form determined by the pathologist was decisive for the performance of subtotal or total gastrectomy with lymph node dissection. These clinical-pathological findings were determined on the basis of the general rules of the American Joint Committee on Cancer (AJCC) [9]. The study was approved by the Institutional Review Board of the Surgery Clinic.

We used the Chi-square test or Fisher’s exact probability test to compare nominal data. The Mann-Whitney U- test was used to compare continuous variables. The overall survival rate from the time of the primary operation was calculated by using the Kaplan-Meier estimates with Log Rank test. The data were analyzed using SPSS 18.0 (Chicago, IL). A probability value of p < 0.05 was considered statistically significant.

A total of 376 GC patients were subjected to surgical management during period from 2007 to 2014. Eleven (2.92%) of these patients had PGC. All the patients were managed as a surgical emergency and laparotomy was performed with the midline incision. Intraoperative diagnosis, surgical staging, and decision about resection or palliative procedure were performed by the surgeon. The clinical-pathological features of all the patients are shown in Table 1.

Among the 11 patients, in 2 patients (18.2%), the diagnosis of GC had been established preoperatively. In 9 of these patients (81.8%), GC was diagnosed subjectively, based on the surgeon’s experience, and a curative operation was attempted at the time of emergency surgery.

Various surgical procedures, based on the subjective judgments of the surgeons, were performed. Simple closure with omental patch was performed in 3 (27.2%) patients due to inoperable GC (poor general condition of patients, extensive tumor spread with adjacent organs invasion, technical difficulties in respective procedures, and severe diffuse fibro-purulent peritonitis). The initial operation of 3 patients discovered that they had peritoneal seeding or liver metastases.

All of the 11 patients had tumors invading serosa with metastatic lymph nodes.

Surgical and postsurgical survival data about the patients with PGC are given in Table 2.

The overall survival period was 58.81±67.70 days for all the eleven patients. The overall 30-day hospital mortality rate was 46%. The longest survival time was 195 days for all the patients. The survival rate was higher among the patients who underwent curative resection (75.77±68.88 days) than in those who underwent simple closure with omental patch (18.00±24.43 days). The difference between the treatments in these groups was significant (p < 0.05).

PGC is a rare complication of GC which manifests with GP [10], diffuse peritonitis [8] and requires surgical emergency [10]. GC is present in 10-16% of patients with GP [11]. Preoperative diagnosis of malignancy is unusual, accounting for about 30% of the cases [1]. In the present study, this diagnosis accounted for 18.2% of the cases and the intraoperative diagnosis of a malignant lesion was determined in 9 (81.8%) of the 11 patients.

In opting for the optimal surgical management strategy, a surgeons’ choice is limited by the age and general condition of the patient. PGC is experienced more often by the patients of advanced age, unlike peptic ulcer perforation, which occurs more frequently in younger population [8]. Ergul et al. claim that if a patient is over 60 years old, malignancy should be considered. Therefore, GP should raise suspicions of malignancy, particularly in elderly patients [12]. The mean age of the patients in our study was 59.90±9.20 years. This result is comparable to previous reports. Similar differences in age were observed by other authors [8], in contrast to benign GP which usually occurs at 51 years of age [11,13].

PGC frequently occurs at the advanced stage of the disease [8], however, it can also occur at the early disease stages [14]. Adachi et al. reported 155 cases of PGC, and in this group, 19% had stage I and 12% had stage II cancer [15]. According to a study by Gertsch et al., TNM staging was a sole predictor of long-term survival, however, age, location, depth of invasion, histopathological grade, and delayed perforation management were not taken into consideration [13].

The spreading of the malignant cells through the perforation site into the peritoneal cavity [16] has been linked to the cancer stage and the extent of serosal invasion [3]. In many previously reported series, almost 60% of surgically treated patients had pathological tumor stages III and IV [17]. In our study, all the patients were in cancer stage III and stage IV, and all the 11 patients had serosal invasion. These patients generally have peritonitis in addition to advanced stage of the disease.

Surgical management of GP is also associated with high mortality rate (10-40%), regardless of the presence or absence of malignancy [10]. Based on other research, it is recommended that in PGC, the initial procedure should be the treatment of perforation and peritonitis. This means either direct closure of the perforation or omental patch application [4]. The radical total gastrectomy or subtotal gastrectomy with D2 and D3 lymphadenectomy or two- stage gastrectomy, in case of less aggressive approach, are the surgical choices for the treatment of amenable GC in patients in good condition and with localized peritonitis, as well as without any sign of shock and comorbidity [17]. In patients with poor clinical condition, simple closure and omental patch repair is a suitable procedure. However, the risk of secondary leakage due to reperforation cannot be excluded [13]. With one-stage technique, malignant GP has been considered to be a terminal disease due to associated peritoneal dissemination and early recurrences. Therefore, this strategy should be used in patients unable to withstand any resection because of their extremely unstable hemodynamic status [16]. With respect to the two-stage surgical treatment, the surgeon should strive to manage peritonitis and control the perforation. Once the patient recovers and the malignity is histologically confirmed, the final gastrectomy with dissection of the corresponding nodes should be planned [11]. According to other studies, the major determinants of improved survival are not only due to curative resection, but also due to TNM stage and absence of postoperative complications [5]. Several reports on PGC showed a significantly better prognosis for patients who underwent curative resection [5,3,11,18] than for those who underwent non-curative resection [3,11,18].

In another study, the survival period in patients was affected by preoperative or postoperative complications and the stage of the disease [3]. In our study, the majority of complications are attributed to cardio-respiratory and septic causes, which is similar to other findings [19]. PGC usually have poor prognosis with overall operative mortality within 30 days ranging from 8% to 52% [20,21]. As seen in our study, 5 patients (46%) died within 30 days. The survival rate was higher among the patients who underwent curative resection (75.77±68.88 days) than in those who underwent simple closure with omental patch (18.00±24.43 days). This result is associated with a delayed operative intervention, the extent of peritoneal contamination, and poor general condition of patients [10].

For the surgeon, immediate surgical treatment in PGC initiates the dilemma regarding the modalities of managing the life-threatening peritonitis and achieving an adequate level of the oncosurgical treatment of the GC. Our experience demonstrates that, although palliative surgery in the form of a simple closure with an omental patch has been recommended in cases with diffuse peritonitis and poor general condition, the patients had a better long-term postoperative survival period when curative resection was performed.