The aims of the study were to estimate the prevalence of excessive weight in infants and school-age children in Sarajevo Canton, to isolate the main causative agents and to propose a strategy for its efficient prevention. The methods included anthropometry and originally designed questionnaire. Calculated body mass index was classified according to the criteria proposed by Centre for Disease Control and Prevention (CDC). The research included 3608 students from elementary and secondary schools from Sarajevo Canton. Nearly 1/5 of subjects had excessive body weight while 12,49% of students were malnourished. Elementary school lower graders had the highest grade of excessive weight, while the secondary school students exhibited the lowest grade of excessive weight. During school hours, about 42,47% of students were fed on bakery produces and snacks. Non-sparkling, thickened juices are frequently consumed beverages (20,65%), second only to water (51,82%). 58,15% of children consume sweets on daily basis. This is even more prominent among secondary school students (80,85%). Only 1/3 of students practice sports on daily basis, while 8,51% of them rarely engage in sports. Elementary school lower grade students had the lowest level of activity while the secondary school students were the most active. As many as 27,56% students spend two hours or more sitting by the computer or TV set.

The most significant mediators of excessive weight gain are sedentary life-style, frequent consumption of sweets and thickened juices and unsuitable nutrition during school hours. Continuous preventive and therapeutically activities must be undertaken among as wide population as possible. 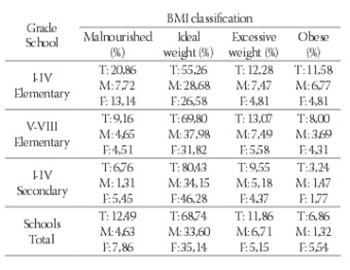