In this paper we present the study of chemotherapy and radiotherapy treatment success in children suffering from Hodgkin’s disease (HD) that were treated at Hematology-oncology Department of Pediatric Clinic in Sarajevo.

In retrospective study we followed all patients with HD aged 0-15 who were diagnosed with and treated for HD at Pediatric Clinic in Sarajevo over the last 10 years (1st of January 1997 - 31st of December 2006).

Until 2000 we used combination of chemotherapy and radiotherapy according to UKCCSG HD 9201 treatment protocol, and after the year 2000 protocol UKCCSG HD 2000 (ChlVPP / ABVD) was applied.

Although many patients (58,1%) were diagnosed in an advanced stage of illness (III and IV) the results of HD therapy at Pediatric Clinic in Sarajevo are comparable to those in other European centers. 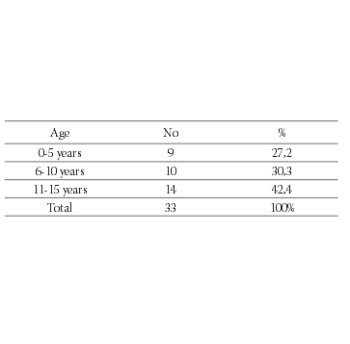