Each haemodialysis treatment requires the application of anticoagulation medicines, which will prevent coagulation in extracorporal blood circulation. In this study we try to determine the quality of admitted anticoagulant and his effect on lipid profile on hemodialysis patients after twelth months. We were applying standard heparin and low weight molecular heparin (LWMH). During our study we was analyzed effect of anticoagulant therapy on lipid profile of hemodialysis patients. In that parameters was included triglycerides, cholesterol, lipoprotein fractions, complete blood count, Hgb, HCT; All of these parameters was analyzed in correlation with duration of hemodialysis treatment, sex and age of the patients. Our research was carried out as a prospective study, for the period of 12 months. In the study were included 60 patients (34M/26F), who were on chronic hemodialysis program. All patients were divided into two groups. The first group of patients was included 27 patients (15M/12F) who were treated with standard heparin. The second group was included 33 patients (19M/14F) treated with LWMH (enoxaparin). The average length of hemodialysis was 4,15 ± 0,52 years. Each patient had a protocol in which is marked parameters such as flushing diallysator, creating fibrin-ring in vein and arterial dropper and the time it takes to stop the bleeding. In the results the average age amounted to 58,54 ± 2,24 years. The average value of cholesterol in the blood was 5,38 ± 2,26. Values of HDL-cholesterol in patients treated with LWMH were significantly lower (P<0,05) in the treated group compared to standard heparin. There were no significant statistical differences between both groups in relation to the level of LDL cholesterol in the blood. (p ns). LWMH had a better effect on the irrigation system and dialysator on both sex equally, compared with standard heparin. LWMH is in the female dialysis population has led to improvements in lipid profile. After the first six months of study in male patients treated with standard heparin in relation to the female part of the observed patients was significantly better anticoagulation effect in the first half of the study (1,85 ± 0,05 compared to 2,09 ± 0,10) (P<0,001). Average rating blood clots were statistically significant for standard heparin (p<0,001) with 1,86 at the beginning the value is fell to 1,41, while for LWMH with 1,85 at the beginning of the study amounted to 1,52 grade average. (P<0, 05). The results of our study show that LWMH had a better rinsing effect of dialysis systems and dialysator in both sex equally, compared to standard unfractioned heparin. When the male part of the respondents in the first six months of standard heparin had a better evaluation of blood clots than women in the same group, and also better than the group on enoxaparin for both gender. LWMH in female dialysis population has led to improved lipid profiles. Patients treated with standard heparin had a statistically significant reduction in the rate of blood clots than patients who received enoxaparin (LWMH).

Such differences were minimal, which can be interpreted by the fact that LWMH still derivative of the standard heparin KEY 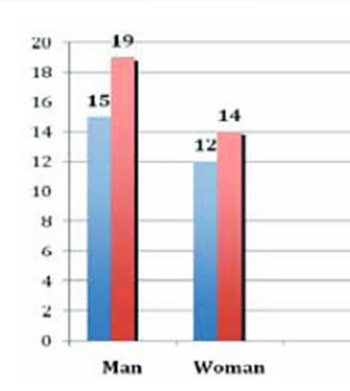