In this study we analyzed patients glucose levels taken before and after coronary artery bypass surgery. The data are taken from University of Sarajevo Clinics Centre-medical documentation of Heart Center from January 1st, 2007 to October 31st, 2007. Therefore, the entire study is done retrospectively. The patients considered in this analysis were divided into three groups. The patients in the first group were treated with peroral antidiabetics. The second group included patients treated with insulin while the third group consisted of patients without diabetes and acted as control group. All the patients had increased BMI. In the first two groups glucose levels were elevated before the surgery. Data analysis showed that three patients from the first group changed from peroral antidiabetics to insulin during postoperative period, and they were dismissed from hospital with this therapy. In the control group, peroral antidiabetis were introduced in four patients. The study results show that all the three groups have had high glycaemia on the first postoperative day. This may be caused by a number of reasons: inadequate pre-operative antidiabetic therapy, the impact of stress during surgery, inadequate pre-operative treatment of glycaemia or avoidance of the proscribed therapy by patients themselves. Stress during operation and administration of several medications after operation may also cause increased insulin resistance and distort glycaemia control. 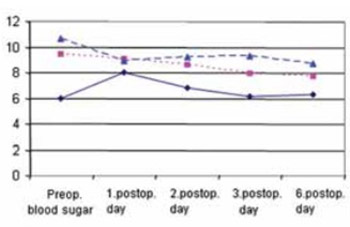