In about 70% of cases, ovarian carcinoma has been diagnosed at an advanced stage. Invasion and metastasis of solid tumors request protease activity resulting in basal membrane destruction and surrounding matrix. In that process, urokinase plasminogen activator (uPA) and its receptor, urokinase plasminogen activator receptor (suPAR) play a key role, that via plasmin activation lead to basal membrane and matrix degradation in surrounding of the tumor, enable to its invasion and metastasis. Determination of serum concentration of those tumor markers can be useful in preoperative as well as in postoperative period. Their serum concentrations in ovarian cancer patients may help in good monitoring of remission or progression during chemotherapy treatment. In late 1950s and eariy 1960s, when it was found out that malignant ovarian tumors were chemosensitive, their chemotherapy treatment has begun. In the beginning it was used only mono-therapy, and by discovering new cytostatics it was replaced by poly-chemotherapy. Now days, in the therapy of advanced stages of ovarian carcinoma combination of cisplatine or carboplatine with paclitaxel is considering as standard treatment. Aim of this study was to determine serum uPA, suPAR and CEA in FIGO II and III patients with different histo-logical type (serous, mucinous, clear cell tumor) before and after PT chemotherapy protocol during following three cycles. In this prospective study we have analyzed 17 patients with ovarian carcinoma, those have been after surgery treated by chemotherapy. Serum levels of uPA and suPAR have been determined by ELISA-test (Imubind uPA, Imubind uPAR, American Diagnostica), and CEA by OPUS Imunoassay method. Results of this study have shown that uPA, suPAR and CEA met criteria for prognostic markers for monitoring of successful-ness of platina/taxol chemotherapy protocol for serous, mucinous and clear cell tumor FIGO II and III stage of ovarian carcinoma. In case of PT chemotherapy protocol suPAR was better prognostic marker for monitoring of chemotherapy successfulness (Pearson coefficient 0,9 do 1,0; p<0,00l) than uPA (Pearson coefficient between 0,86 and 0,92; p<0,02) and CEA (Pearson coefficient 0,5 do 0,89; p<0,04). 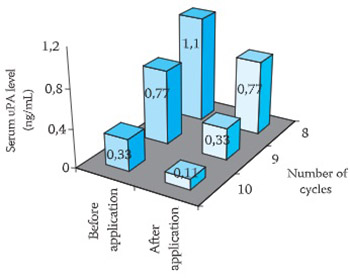