Neutral red is a dye the azine structure which has been used as an acido-base indicator and a dye in histochemistry. In 1960 Goldhaber introduced Neutral red into the medium of resorbing bone cultures to localize the osteoclast in the living cultures. Using time-lapse microcinematography in order to follow the osteoclasts, he reported excellent contrast could be obtained with Neutral red due to the avidity of osteoclasts for this dye. Unfortunately, however, the photodynamic effect resulting from subsequent exposure of these cultures to light precluded this approach, and again in 1963. it was observed that the death of the osteoclasts was probably due to a photodynamic effect related to the dye in the cell, the presence of oxygen and the frequent exposure of light by our time-lapse photography. VIS and UV irradiation induced photolysis of Neutral red, and from Neutral red cation produced with photons a Neutral red radical. This Neutral red radical can be inhibited with action of an antioxidant, such as melatonin, glutathione, ascorbic acid, E vitamin, etc. We developed an assay with Neutral redphotolysis which utilizes a VIS and UV irradiation technique for quantification the inhibition of photolysis with action of an antioxidant. In this method Neutral red acts double, as a free radical generator and as a photosensitizer. 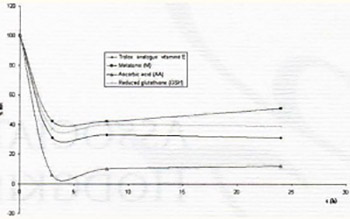